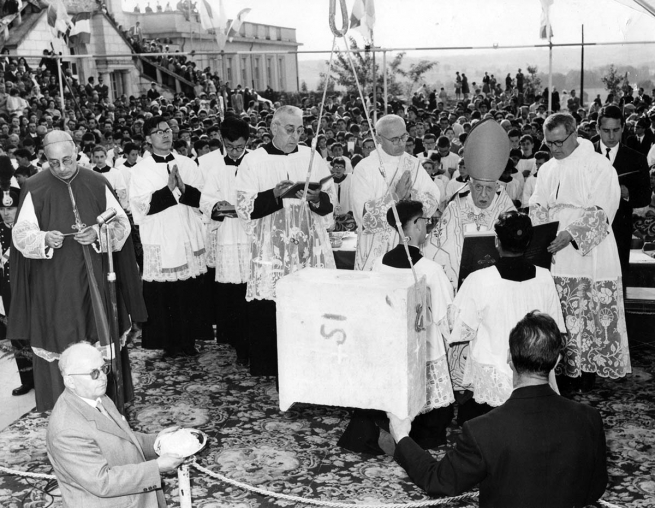 (ANS - Castelnuovo Don Bosco) - Exactly 60 years ago, on 11 June 1961, the ceremony of laying the foundation stone of the "Don Bosco" Temple in Castelnuovo Don Bosco took place on the very site where the "Saint of Youth" was born. The stone was blessed and set by the then archbishop of Turin, Cardinal Maurilio Fossati. It was the beginning of the works that led, after a few years, to what one can see is now a vast and imposing basilica soaring on the "Colle Don Bosco".

The Basilica, which became such on April 12, 2010, by the will of Pope Benedict XVI, is made up of two superimposed churches and was designed by Eng. Enea Rocca and built by the construction company of Giuseppe Stura and Sons. It was built on the site of the “Biglione farmhouse” of which Don Bosco's father, Francesco, was a sharecropper. The Bosco family lived in the farmhouse and Giovanni Bosco was born there on August 16, 1815.

On the afternoon of that 11 June, the Chronicle of the House reports the presence of numerous religious and Salesian personalities: in addition to Card. Fossati, there was also the bishop of Asti and other bishops; the Rector Major of the time, Fr Renato Ziggiotti, accompanied by his Vicar, the General Economer, and several other General Councilors, including the future Rector Major Fr Luigi Ricceri; the Mother General of the Daughters of Mary Help of Christians, Mother Angela Vespa, together with her Vicar, and the General Economer; civil authorities such as the Vice-prefect and the Commissioner of Asti, the mayor of the municipality of Castelnuovo, Giuseppe Musso.

The stone did not come from the quarries, but from the Turin basilica of Maria Ausiliatrice, where it served as a base for the painting of the Madonna.

"The speech was given, with new eloquence and unusual warmth, by Fr Guido Favini, Secretary General of the Salesian Cooperators, who was able to highlight the truest meaning of the ceremony, as it was intended to be a tribute to the whole Salesian Family in the ever more felt presence of Don Bosco in the contemporary world,” the chronicle continues with precision.

Then Fr Ziggiotti read the telegram from the Secretariat of State of His Holiness, and read the petition which was walled up in the First Stone together with the parchment. Addressing Don Bosco himself, the plea affirmed:

"We swear fidelity to the program you left us: prayer and work for the apostolate of souls; religion, reason and loving kindness, in our educational system and in all social relationships; fervent love for Jesus, for Mary Most Holy, for the Pope, for the Hierarchy, for the Holy Church. And help us from Heaven to live holy in the practice of the Constitutions and Regulations; to remain faithful to our vocation until death, to expand the kingdom of Jesus Christ in the world ..."

While the parchment, in addition to citing the names of the authorities present, also cited the purpose of this sanctuary dedicated to Don Bosco: "so that prayer may be raised confidently to implore for protection on the lands so dear to his childhood."