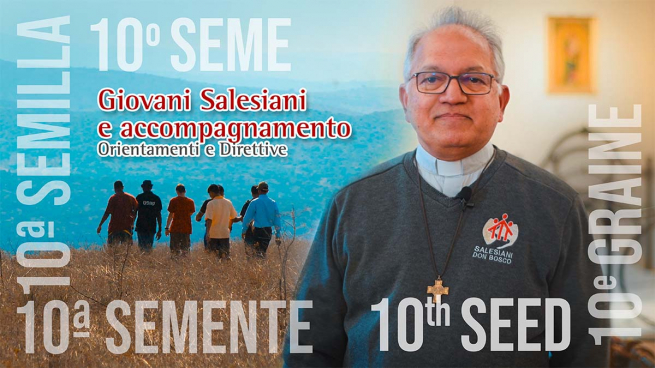 (ANS - Rome) - The tenth video seed completes the series of aids offered in recent months to encourage the reading and sharing of "Young Salesians and Accompaniment – Orientations and Guidelines" (GSA). In this last message, Rector Major Fr Ángel Fernández Artime and the General Councilor for Formation Fr Ivo Coelho, together with Christopher, Wellington, Carl, Ignazio, young post-novice confreres, trainees and theology students who, together with many other companions, have made the production of this and previous video messages possible.

The last focus is “permanent accompaniment”. As the document says, "Personal spiritual accompaniment is not meant only for handling crises; its aim is continued growth in Christ. Just as formation is lifelong, so also personal spiritual accompaniment is lifelong." (GSA 174). What is proposed here is perfectly in line with what the Church is following today and which Pope Francis in his magisterium has repeatedly reiterated: "Let us bring others to Jesus, but let us also allow ourselves to be led by Him. This is what we should be: guides who themselves are guided." (2/2/2015).

If there is a witness who speaks unequivocally with his life on this issue, it is Don Bosco. " Don Bosco was guided for almost 30 years by Cafasso, and before that by a series of directors beginning with the good Calosso." (GSA 173).

The words with which Fr Angel ends the video message are like a mandate that fulfills and opens the way at the same time. It's more of a beginning than an end, not just for this 10th seed video, but for the whole journey so far. After all, this journey had no other purpose than to open a path and encourage everyone to follow it, so as to permanently become good guides for young people, capable of letting themselves be guided by the voice of the Spirit through the many mediations with which He accompanies us every day.

"Accompaniment is formation in mission. Living accompaniment well allows us, in turn, to become valid traveling companions of young people, just as Don Bosco was for Magone, for Savio. Following him Albera, Rua, Cagliero, Rinaldi have been able to guide generations of young people and Salesians all the way to us. It is a seed that identifies with Don Bosco's charism and mission.”

“And it is what the young people have expressly asked of us during the 28th General Chapter. Let us not disappoint them. In order to respond to them, we must first of all be guided guides, in all the seasons of our lives, starting with this one we are living, beginning with today.” (Fr Angel).

The most heartfelt thanks from the Formation Department goes to the province of Sicily, to the community of Alcamo, and in particular to one of their young trainee confreres, Moschetti Orazio, who with great dedication took care of all the shooting and editing of the videos. for the dissemination of both this document and of "Animating and Governing the Community - the Ministry of the Salesian Rector". Each video was produced in 5 different languages for a total of 70 productions and montages in 10 months. And all this without changing the already very demanding agenda of the commitments he has as a trainee in his community.

It is nice to conclude with this sincere appreciation of what the young confreres can do, because in fact "Young Salesians and Accompaniment - Orientations and Guidelines" is mainly the result of what more than 3,500 young people in formation from the pre-novitiate to the five-year period have contributed in the 2017 study, from which this journey began. We hope that this active and generous cooperation will also characterize the process of revising the Ratio, which has just begun.

It can be downloaded together with the related animation materials, as well as access to the 9 previous seeds/videos and related aids, from the multimedia section of the formation page on the website: www.sdb.org.