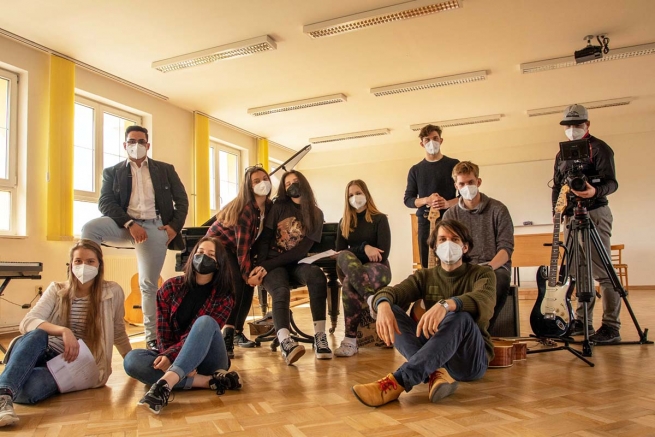 (ANS - Žilina) - The “Saint Joseph the Worker” Vocational Training Center (VTC) in Žilina, Slovakia, celebrated the 30th anniversary of the school's foundation in May. Despite the country's pandemic situation, which kept high schools closed for almost seven months during the school year, the institute's educators sought ways to involve children in the anniversary celebrations. And it was the young people themselves who were the protagonists of the various online activities through which the school was able to celebrate the anniversary.

The students who study to become graphic designers, but also those studying as car mechanics, carpenters, or bricklayers prepared several digital meetings, webinars, debates and even videos to commemorate 30 years of this Salesian work, the only high school in the Slovakia held by the Sons of Don Bosco.

In May, school employees were able to at least celebrate the anniversary with the Salesian community and the Provincial, who thanked the teachers for their educational commitment to young people.

This commitment was also shown in involving the young people to participate in the “FestiClip”, the international short film festival organized by the Salesians of France. A team of 25 students produced a short film that tells the story and the dream of a young girl. This activity also brought great joy and enthusiasm to the school and the children themselves: in fact, in addition to the pleasure of working together with a common goal, on 5 June the short film participated in the festival online and won one of the festival's prizes, the one awarded by the jury.

"We wish the young people and the school yet more enthusiasm for their work and we hope that in September they can also meet personally with the past pupils and families for the great anniversary celebrations," commented the educators of Žilina.

The film, in the English version, is available on the YouTube channel of the Salesian institute.