India – Salesian Family in Hyderabad: ambulance and many initiatives for Covid-19 patients and needy 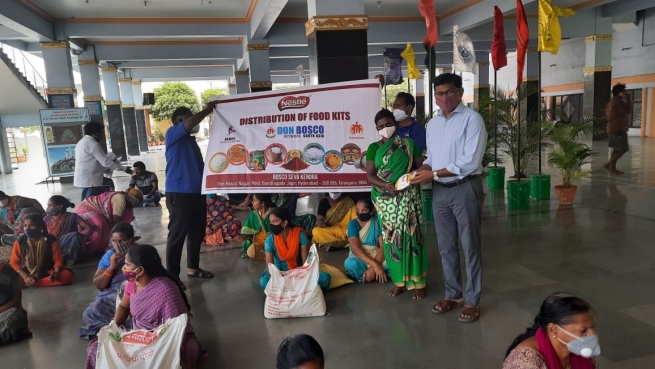 (ANS - Hyderabad) - The "Saint Joseph" Province of India-Hyderabad continues to work in many ways and without pause to help people infected with Covid-19, their families, and those suffering from the consequences of the pandemic. Among the most significant initiatives recently launched is an ambulance service made available by the group of past pupils of the Don Bosco Institute in Mangalagiri.

The Past Pupils felt called to provide this good and much-needed service after having had to helplessly witness the death of many people - friends and collaborators - affected by Covid-19, due also to the unavailability of means of transport to reach hospitals with the oxygen.

Mr. Ravi, the President of the Local Union of Past Pupils, together with other members and the Salesian community of Mangalagiri, raised funds and made friends and agencies aware of this cause. So they managed to buy an Omni Van and transform it into an ambulance.

The vehicle, which offers its service free of charge to the poor, entered service last Sunday, June 13, 2021, after a ceremony that saw several Past Pupils participate, including the President of the "SC Finance Corporation" for Andhra Pradesh, Fr Garlapati Michael Kishore, Provincial Delegate for Past Pupils, Fr Parokaran Jose, Delegate for the Local Union of Mangalagiri, and Fr Banda Suresh, who thanked the Past Pupils for their generosity.

Especially noteworthy, among the other initiatives recently carried out in the INH Province: