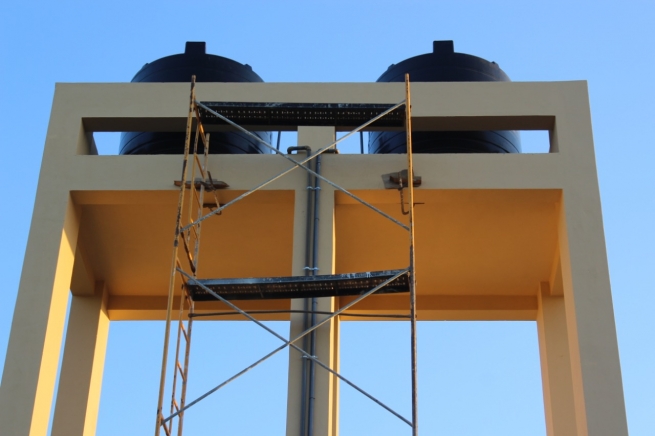 The project provided a new borewell and water tank with a distribution system on the Salesian grounds, which houses the college and a Salesian coordination house. More than 700 people were directly impacted by this project and another 200 families from the local community will also be able to access the new water source.

The Salesian College is a higher education institution dedicated to teacher training for professional, technical and vocational schools. The institution has close to 600 students attending and offers courses in hospitality and tourism, mechanics and electricity, information and communication technologies, and administration sciences. On the same grounds is the Salesian coordination house, which is the headquarters of the Salesians of Don Bosco for the entire country of Mozambique. The coordination team works and lives there.

The borewell and new water source were needed because of the high cost of water supplied by the national network FIPAG (Investment Fund and Heritage of Water Supply). FIPAG also faces water supply capacity problems and has not been able to meet the demand for water. There are several restrictions and breaks in the supply that sometimes last a week. This makes it extremely difficult to run an educational institution with many students.

The project will ensure that the Salesian community has access to the water supply it needs, keep costs low, and ensure the quality of water provided to Salesian staff and students. This project is the first phase. Additional funding is needed for an electrical pump and switchboard and other activities for clean water access.

“Salesian Missions has made clean water projects a priority for the health and safety of those we serve,” said Father Gus Baek, director of Salesian Missions. “Improving water access ensures that teachers and students are working and learning in an environment that promotes proper hygiene and has safe drinking water. This reduces the number of waterborne illnesses that can affect those in our schools, keeping them away from important study time.”

Salesian missionaries have been living and working in Mozambique for 110 years, providing education and social development programs for poor youth. The country gained its independence in 1975, but a civil war erupted in 1977 and lasted until peace treaties were signed in Rome in 1992. The civil war left some 60,000 youth with few employment prospects, little training and war being their only education.

Mozambique has made great strides in reducing poverty, according to the World Bank. But with nearly 50 percent of the population still living in poverty, progress has not been fast enough. Poverty is concentrated in rural areas, and even with growth within the country, the regions of Zambezia, Sofala, Manica and Gaza saw an increase in poverty in the 2000s.

More than 70 percent of those living in poverty reside in rural areas and rely on farming and fishing to make a living. The vast majority of the rural population lives on less than $1.25 a day and lacks basic services such as access to safe water, health facilities and schools.