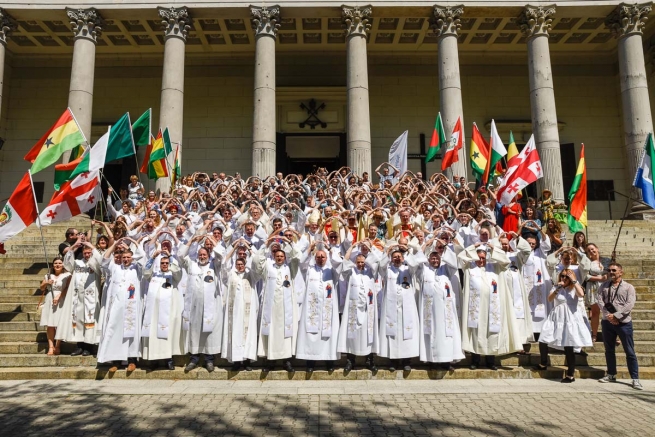 (ANS - Warsaw) - On 19 June the Salesian Missionary Center in Warsaw celebrated its 40th anniversary. For the occasion, a Mass was celebrated at 12 local time, presided over by Msgr. Jerzy Mazur, bishop of Ełk and President of the Commission for Missions within the Polish Episcopal Conference, during which 21 volunteers received their mandate and missionary crosses.

These young people will leave in the coming weeks to work in various missionary outposts in Africa, South America, Asia and Europe. “We are all sent to go to the peripheries, to look for human beings wherever they live, work and rest and suffer. Having a missionary spirit is to go to preach,” underlined Msgr. Mazur in his homily.

Subsequently, at 3 pm, a missionary program began, conducted by the television journalist Paulina Guzik. The highlights of the program were a round table with missionaries and volunteers, a teleconference with the missionaries - two sessions attended by men and women religious of the Salesian Family, together with several young people, active in Africa, Asia and Latin America - and a concert by Magda Anioł, Polish singer of Christian music.

“The 40th anniversary of the Salesian Missionary Center is an opportunity for us to give thanks to God for the great amount of good that is being done through the Center,” said, on the sidelines of the Mass, Fr Jacek Zdzieborski, Director of the Salesian Missionary Center. “It is an opportunity to thank the missionaries for their attentive and zealous service on all continents. It is an opportunity to express gratitude to all benefactors, without whom this work would not be possible, as well as to volunteers, workers, collaborators, and all supporters of Don Bosco's missionary work. All together we form an army of thousands of people for whom the fate of another person does not remain indifferent to us. Together we create a Salesian Missionary Family!”

During the day of celebration, a traveling exhibition on the history and activities of the Salesian Missionary Center was also presented, with pavilions full of gadgets brought from Madagascar and Ghana, books and missionary material, so that visitors could also take souvenir photos on a missionary background.

The origins of the Salesian Missionary Center in Warsaw are associated with the "Project Africa" announced by the Salesian Family to the world in 1978. At the time Salesians, Daughters of Mary Help of Christians and lay people were invited to missionary work in favor of the African Continent. The Salesian Missionary Center was established three years later, in September 1981. And over time it became not only a home for missionaries, but also a base for the development of missionary activities. New departments were created - for Missionary Projects and Long Distance Adoptions, which made it possible to materially support the missionary outposts. And in 2002, the Center began training lay volunteers for the mission. This is how the Don Bosco International Voluntary Service (MWDB) was born.