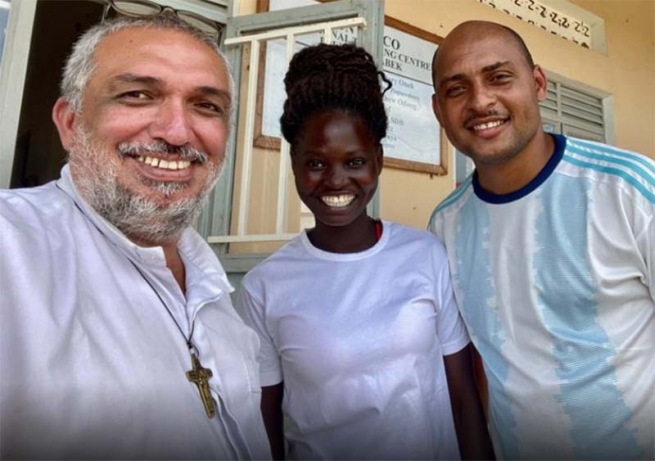 (ANS - Juba) - Gladys is a young South Sudanese woman, already a widow and mother at 25, as well as one of the protagonists of the documentary “Palabek. Refuge of Hope” produced by the Salesian Mission Office of Madrid - “Misiones Salesianas” - to narrate the story of the refugees welcomed in the refugee camp of Palabek, Uganda, and of the Salesians who work there. Gladys always knew that to give her son Martin a better future than she had, she would have to study hard. Why she learned to repair motorcycles in the Salesian vocational training school in Palabek. A few weeks ago, her dream came true: she found a job as a professional driver at the service of the United Nations in Juba, the capital of her tormented country, South Sudan.

The war had forced Gladys to flee her home to seek a better future elsewhere. She had become a refugee in Uganda, welcomed in Palabek, but had had to leave her son in her native village in the care of the child's grandmother. To see her son and mother, Gladys rented a motorbike and rode from Palabek to visit them on weekends whenever she could.

After going through three refugee camps, in addition to peace, Gladys dreamed of only one thing: to become a professional driver. This is why she attended a Motorcycle Repair Course at the Don Bosco Technical School in Palabek, the only female among many men. "I don't care that they're all men. I want to learn how to repair motorcycles to avoid danger when I return to South Sudan," she explained. Nor was she discouraged by having to get up at dawn and walk more than 6 kilometers every day to get to classes on time.

Gladys is now 25 and Martin is 4. She was part of the first class of graduates of the Don Bosco Technical School. While studying she also busied herself with a small sewing machine and so she earned some money for traveling on weekends. When she finished her lessons, her commitment and her involvement led her to take care of the materials warehouse of the technical school. Thanks to the support of "Misiones Salesianas" and the Salesian NGO "Jóvenes y Desarrollo", she was also able to learn to drive a car and obtained her driving license.

In recent weeks she passed a driving test for the UN office in Juba and was hired. Her joy was so great that she returned to Palabek just to thank the Salesians for the opportunity they had given her with education at the Don Bosco vocational school.

The farewell was, in truth, a "see you again soon". Because Gladys – a woman, young, poor, refugee, mother and widow, but above all a strenuous fighter - wants to keep in touch with the Salesians and make all her dreams come true. Her next challenge is to continue studying so that her son Martin can have a better future and can live in peace.