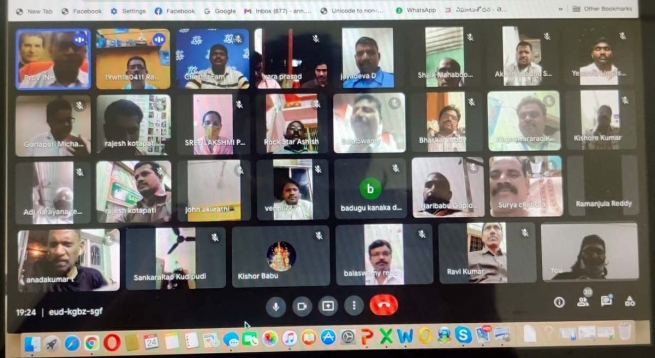 (ANS - Hyderabad) - The Past Pupils of Don Bosco from all over the world celebrated their 150th anniversary on 24 June 2020. The Salesian "Saint Joseph" Province of India-Hyderabad celebrated the event, which marks the completion of the anniversary of the Past Pupils, with a virtual meeting that took place yesterday, June 24, 2021, the day of Don Bosco's name-day feast.

Fr Garlapati Michael Kishore, Provincial Delegate of the Past Pupils, first of all thanked Fr Thathireddy Vijaya Bhaska, INH Provincial. After the initial greetings, the celebrations began. There were representatives of nine units of Past Pupils from the states of Telangana, Andhra Pradesh and South Odisha with a total of 42 participants.

During the virtual meeting, the works carried out by the Salesians in these months marked by the pandemic were briefly illustrated. The Past Pupils presented some of the activities carried out in this period, such as the ambulance service made available by the group of past pupils of the Don Bosco Institute in Mangalagiri, the scholarships offered to poor students in Patsala Tadaiparru, and the aid for sustenance to Ravulapalem.

Also, the Past Pupils welcomed the idea of adopting 15 orphaned children due to the Covid-19 pandemic. Financial aid is provided in particular for all those minors who, during the second wave of the pandemic, have lost parents, legal guardians or adoptive parents.

The Provincial took the opportunity to remember the origins of the Past Pupils. In 1870, Carlo Gastini and his companions went to Valdocco to thank Don Bosco on his name-day. Immediately, Don Bosco invited them to stay with him as part of the Salesian Family. He told them that the first responsibility of a Past Pupil is to take care of their family. Today, faced with the emergency, they are called to help these orphaned children.

Fr Garlapati Michael Kishore then highlighted how, 150 years later, Don Bosco's dreams can still be seen and lived and expressed the hope that the Past Pupils can always continue to enrich the Salesian Family.

Finally, Mr. Pamisetty Balaswamy, provincial secretary of the Indian National Federation of Don Bosco Past Pupils, wanted to thank all those who made these virtual celebrations possible. The meeting ended with a moment of conviviality and with the final blessing from the Provincial.