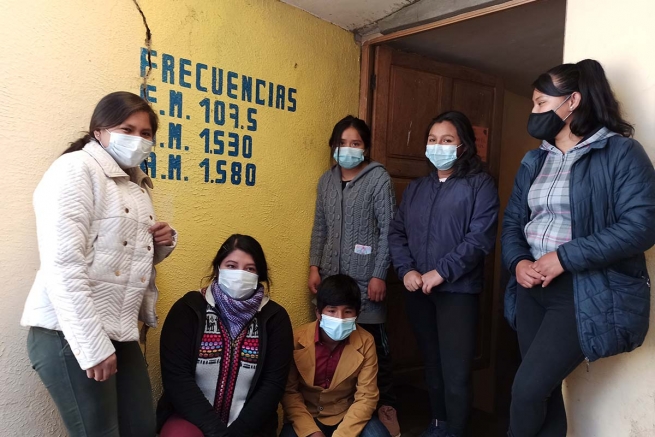 (ANS - Independencia) - The staff members of the Salesian radio stations "Domingo Savio", based in Independencia, and "Don Bosco", in Kami, met last Saturday, 26 June, in the premises of the Salesian house in Independencia to coordinate their respective tasks given the unification of their programming - a process that began a few years ago, but which, due to factors beyond their control, has not yet been completed.

The unification process fully restarted in mid-May when the Directors and operators of these two Salesian radios began to plan the unification of their programming to expand not only their analog signal, but also to enter decisively into digital broadcasting via the Internet and give life to what they will call "Red Salesiana Andina".

To date, the two broadcasters already have joint programming and are conducting technical broadcasting tests that allow a stable signal both locally, in radio waves, and globally, through digital. Both radio stations, for this phase, can count on a young staff that highlights the energy, vitality and commitment of the Salesian charism.

Kami's “Don Bosco” Radio was born in 1983 on the initiative of Fr Miguel Ángel Aimar, SDB, to be a tool for information, formation, entertainment, social change and strengthening of the mining cooperative system. It was inaugurated in August 1985, but for technical reasons, it began to broadcast a stable signal only in 1986. Currently its director is Salesian Fr Orlando Astorga.

Radio "Domingo Savio" of Independencia began broadcasting on January 28, 1990. Born on the initiative of Fr Pasquale Cerchi, SDB, (1921 - 1999), it was further developed and promoted by the Salesian Brother Pacifico Feletti (1931 - 1995) with the goal of creating a greater link between the cantons and the communities in the area. Fr Julián Tayandi, SDB, is currently the radio's Director.

The editorial offices of both Salesian broadcasters are permeated by an atmosphere of fraternity and recently of anxious expectation: in July, in fact, both stations will begin the joint transition tests within the new signal in what will become the “Red Salesiana Andina”.