RMG – Renewed with a vision for the future: meeting of SYM'S "Small Team" from Europe and Middle East 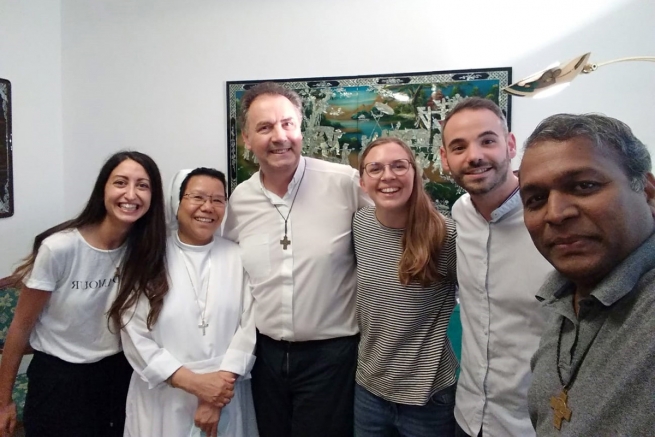 (ANS - Rome) - The "Small Team" of the Salesian Youth Movement (SYM) of Europe and the Middle East has returned to meet in person, in Rome, after months marked by the pandemic, during which only monthly online meetings were possible. The team met from 24 to 29 June to continue working and coordinating SYM's future.

On 24 June, Don Bosco's name day and the feast of the Rector Major, representatives of the “Small Team” took part in the Eucharist in the Basilica of the Sacred Heart, followed by a dinner with the whole community and the General Council of the Salesians. Everything took place in a festive atmosphere of gratitude and communion.

During these days, the “Small Team” dedicated a good part of the meetings to formation, so necessary to continue planning the SYM. On the first day, Fr Raymond Callo, SDB, was charged with speaking and reflecting on the “Letter of Rome”. The second moment, the formative one, was prepared by the General Councilor for Youth Ministry, Fr Miguel Ángel García Morcuende, and centered on the Encyclical "Fratelli Tutti". This second moment was presented by Fr Patrick Anthonyraj. The third formative session was led by Sister Runita Borja, General Councilor for FMA's Youth Ministry. She discussed the figure of Mary as a living and dynamic presence in Salesian Youth Spirituality.

One of this meeting's most important moments  was participation in the Sunday Eucharist in St. Peter's Basilica in the Vatican and the subsequent Angelus of Pope Francis. Furthermore, on Sunday the “Small Team” had a meeting with the Rector Major of the Salesians, Fr Ángel Fernández Artime. Both were moments of immense joy and inexhaustible inspiration.

Despite the complicated circumstances in which we live, the Salesian Youth Movement continues to be very much alive, dynamic and enthusiastic. Young people who live their vocation of service with passion within the mission entrusted to them and who are ready to give their time to continue working with passion and energy in a Salesian Youth Movement full of hope and new projects.