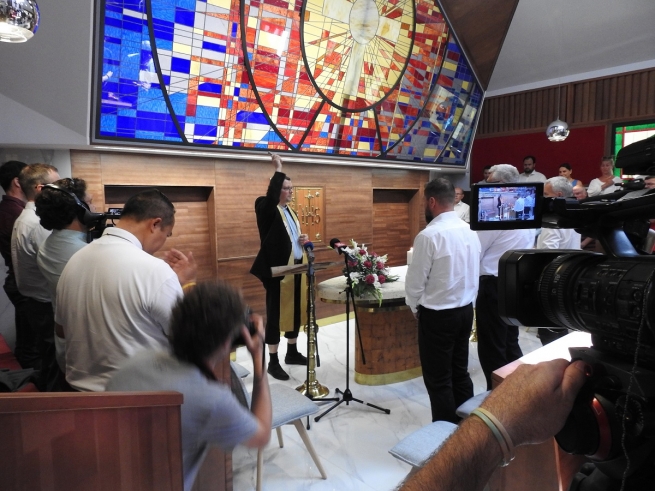 The new religious house of the Salesians was constructed at a cost of 6.2 million euro donated by the Hungarian government. The Salesians house a study center for children, cultural gatherings for the general public, a Salesian chapel and library, and the parish office.

Fr Béla Ábrahám SDB, the Rector of the institution, highlighted that the innovative idea of construction of the new Salesian house is to open the doors for the lay people to collaborate and better coordinate the pastoral work, especially in the two Salesian schools, parish and religious community.

Fr János Andrásfalvy, the Salesian Provincial, blessed the new building in an atmosphere of prayerful singing.

The day was remarkable as one of the government projects ”Tedd képessé” (Make Capable) program, which operates within the framework of the Don Bosco Vocational School, got its brand new building. The topping out feast of the same was celebrated after the blessing of the new religious house at Kazincbarcika in a very grand manner.

It was delightful to see the Father Provincial accompanying the State Secretary Miklós Soltész, who is in charge of the Churches in Hungary, Gáborné Pölöskei, the Innovative Technology State Secretary in charge of technical schools, Zoltán Demeter, Member of Parliament, Lőrinc Nacsa, Member of Parliament, and Péter Szitka, the Mayor of Kazincbarcika.

The distinguished guests were astonished to witness the ”Tedd képessé” (Make capable) project come true. The various courses offered - welding, metal-working, home furnishing, bricklaying, plumbing and painting – shall be made available to the poor and downtrodden youth of Hungary through the instrumentality of the Salesians.