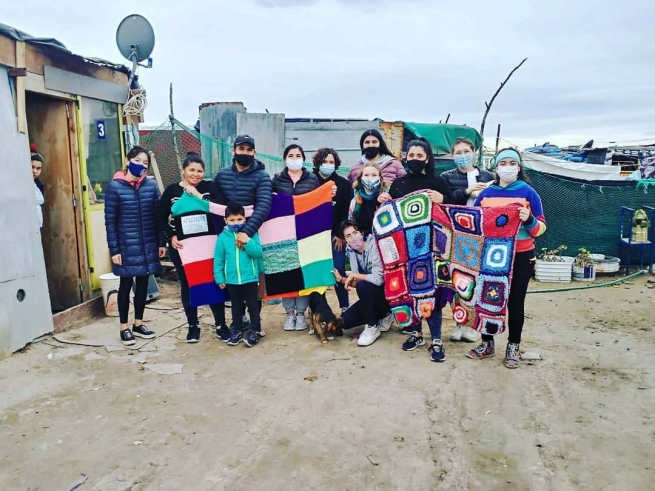 (ANS - Rawson) - The "Afrazados" (Intabarrati) project is a proposal of the Salesian house in Rawson, in the Province of Chubut, which intends to express, through the weaving and donation of blankets, the community's embrace of the most needy families, to accompany them during the winter months. The project, which began in 2010, is also "Salesian" for another reason: it is the result of the vision, goodwill and spirit of initiative of a young girl, at the time a first-year student at the Salesian school in Rawson.

In past editions, the blankets made were intended only for families from the city of Rawson and the Chubut plateau, within the province; but this year it was decided to add the Andean Comarca among the beneficiaries, taking into account the serious fires recorded there during the summer.

In the first edition, seven blankets were made and donated; but, given the project's effectiveness and the satisfaction and gratitude of the beneficiaries, more and more people have joined the initiative and over time the volumes have grown, up to tenfold, literally, in 2019, the year in which in fact produced and delivered 70 blankets.

The proposal of "Afrazados" today involves many people of goodwill, not only in Rawson, but also in other municipalities of the Province and beyond: seamstresses and weavers also participate in it from Puerto Madryn, Trelew, Comodoro Rivadavia, Bahía Blanca and Buenos Aires.

But sewing is not the only way to support this initiative: there are also those who limit themselves to delivering small squares of fabric that are then joined to form a blanket; other people donating wool; and still others take care of delivering the finished blankets.

The project also remained active in 2020 at the height of the pandemic: families knitted from their homes and then sent what they had created to the Salesian institute. The closing event, which until then had always taken place on the occasion of the feast day of Mary Help of Christians, with an actual meeting of the weaving families and the various participants in the initiative, was carried out through a videoconference and was completed with an online sewing training session.

This year about thirty blankets have already been woven, many already given to some families of the community of Rawson and the Chubut plateau by the young people of the Salesian Youth Movement (SYM) and in collaboration with the parish "Mary Help of Christians" of Rawson.

And in the meantime they still continue to knit, to produce blankets and give them to those who need them most.