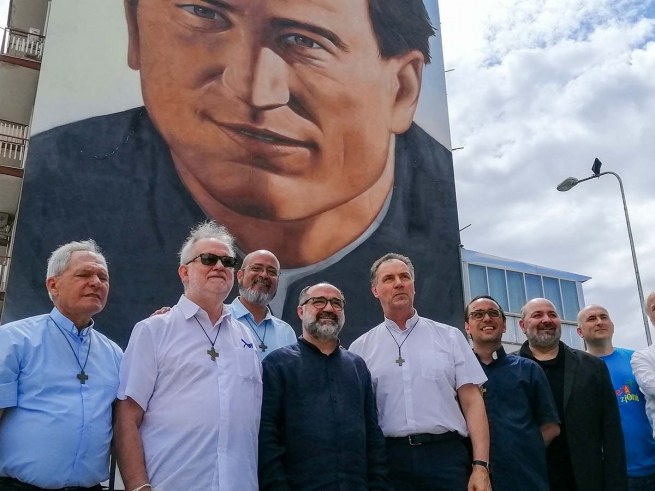 (ANS - Foggia) - At the Salesian house "Sacred Heart of Jesus" in Foggia, on Saturday 17 July, the Southern Salesian Province (IME) inaugurated "Casa Gio", the new Housing Community for minors in the presence and with the blessing of the Rector Major, Fr Ángel Fernández Artime, accompanied by three General Councilors: the Councilor for the Mediterranean Region, Fr Juan Carlos Pérez Godoy, the Councilor for the Interamerica Region, Fr Hugo Orozco, and the Regional Councilor for Central Europe and North, Fr Roman Jachimowicz.

The Rector Major had already been in Foggia in 2018 for the celebrations of the fiftieth year of the Salesian presence. This time he was welcomed by a delegation from the community who, together with Fr Angelo Santorsola, Provincial of Southern Italy (IME), and Fr Gino Cella, the Director of the Salesian house, led him to the Candelaro district to discover the urban and social conditions in which the housing community arises. The network of structures that work to deal with the educational emergencies of the younger generations was also presented. The Rector Major, in particular, was welcomed with songs to Don Bosco sung by the children of the "Sorriso del sole" kindergarten and visited a school complex where the educational garden workshops of the ReGenerAzioni project are held (a Salesian project selected by Social Enterprise "con I Bambini, with Children" as part of the Fund for contrasting Educational Poverty).

In the afternoon, about 40 young people and social workers from the seven IME family homes in Puglia and Campania, managed by the association "Piccoli passi grandi sogni aps - Small steps, big dreams", reached the work of Foggia to get to know today's Don Bosco "in the flesh". A sincere, intense meeting with familiar tones took place in the living area of ​​the new Housing Community. The president, Fr Antonio Carbone, mediated between Fr Ángel Fernández Artime and the children, and presented the realities managed by the association.

“In each structure about 8 minors from different backgrounds are welcomed,” explained Fr Carbone. “From 2007 to today, we have taken care of about 500 minors entrusted by the Territorial Education Services and Juvenile Justice Centers. We are happy to inaugurate a new community, even if as Salesians we would like every child to be able to experience the warmth of his own family in his home of origin.”

Ms. Patrizia, representing the social workers of the communities who, even in the most difficult period of the lockdown, continued to be at the side of every minor entrusted to them, underlined: "What we've received, what we are donating and what the Salesians in the oratory have taught us has become for us a vocation, a profession.”

Fr Ángel Fernández Artime concludes speaking to the hearts of the young people: “We cannot fail to imagine the Salesian presence in the world without a Pinardi House like in Valdocco, to be close to young people who have no one and are without any possibilities. For each of you, the most difficult situation has passe; it's time to write a new beautiful page in your life.”

Afterwards, the Pastoral Educational Community experienced the Eucharistic Celebration, presided over by the Rector Major, in the Salesian parish "Sacred Heart of Jesus", and then a moment of prayer in the oratory with the official blessing of the people and the "walls" of the Accommodation Community “Casa Gio” by the Rector Major himself.