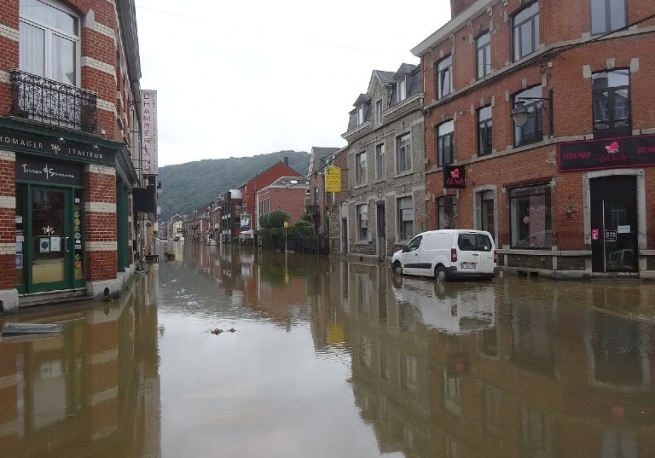 (ANS - Liège) - Remouchamps, Verviers, Liège, Farnières (Vielsalm), Huy: Belgian territory was hit this week by dramatic floods, which caused 7 deaths and 100 people missing in the provinces of Liège and Namur, cities where the Salesian works and houses are numerous.

In Remouchamps, which is located right next to the Amblève River, the “St. Joseph - St. Raphael” institute suffered serious damage, especially in the welding workshop with damage estimated at over 100,000 euros. Less damaged, the carpentry workshop, where less water entered. The gym, the hall, the refectory and the kitchen were also flooded. "The mud is the most serious factor. A team of about ten people took up the challenge of removing it and I was able to see the result of their efforts in the last two days," explained Fr Luc Herpoel, a Salesian from the Don Bosco community in Liege.

The Don Bosco school in Verviers was also seriously damaged. In fact, all the machinery in the workshops has been lost. An appeal was therefore made for volunteers to help clear the area and clean up.

At the spiritual center of Farnières, however, bad weather had no impact on the house. Thus, the community immediately mobilized to prepare meals for the victims of these serious floods and to host, within its premises, the families who have lost everything.

The house of the Salesian sisters, in Notre-Dame-au-Bois, also suffered considerable damage, with the games room and storage totally flooded. "The water reached us up to mid-calf and so we had to leave," says Sister Joëlle Drouin. Fortunately, the games and other materials were stored on the shelves and can be recovered. However, some doors no longer close, they are swollen and damaged by water. The sisters, who welcomed 36 children for the activities during the torrential rains, said: "Everyone kept their spirits high. The animators were very creative and the children had a lot of fun. The parents, for their part, were happy to entrust their children to us, while they repaired the damage, especially to their farms,” adds Sister Joëlle.

Finally, in Liège, no damage was reported in the whole house, which is located in the highest part of the city. "The young people were frightened and we received warning messages, urging us to leave the city. We reassured everyone, even if it was a difficult moment," continues Fr Luc. Then, on Thursday evening, the community hosted a person who was unable to return home due to rising waters.

On Tuesday 20 July, a Mass will be celebrated in Liège, which Salesians will participate in, to commemorate those who died in the floods.