Poland - In Oświęcim, a series of concerts entitled "Music in the style of Don Bosco" 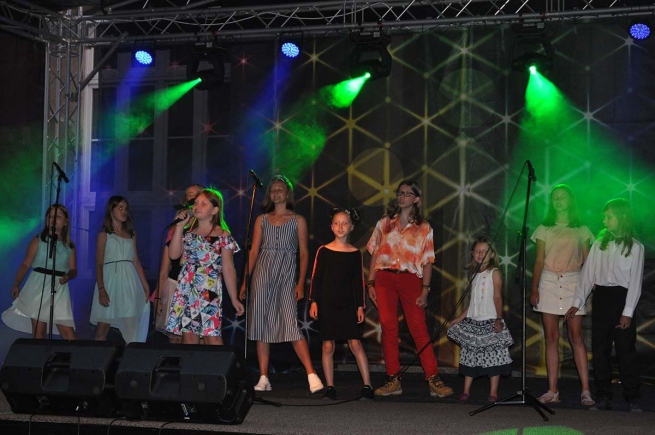 (ANS - Oświęcim) - On 2 July, a series of concerts entitled "Boskie Granie" - literally Divine Play in Polish -, but also known as "Music in the style of Don Bosco" began in the city of Oświęcim. The latter are organized by the Salesians and supported by the City of Oświęcim.

"Music in the style of Don Bosco" is an initiative that has been taking place for 3 years, and constitutes a series of concerts and theatrical performances that take place every Friday. It is a proposal addressed to citizens and tourists and, above all, to young artists, who thus have a chance to perform on a professional stage.

On Friday 2 July, the first group, the "Studio Wokalne Voicesing", performed on the stage located in the square of St Hyacinth of the Salesian Institute before the chapel of the same name. All viewers were amazed by their voices. Subsequently, the group offered the audience a surprise: a young artist, Joasia, made her debut on stage with a song of her own and the audience rewarded her with much applause.

On the following Friday, other very young artists were also very much appreciated, artists who are developing their vocal and artistic skills at the Cultural Center in Oświęcim-Zasole, not far from the Auschwitz concentration camp, where the Salesian parish is also located.

Fr Dariusz Bartocha, Director of the Salesian Institute in Oświęcim, explains this initiative as follows: “Boskie Granie was initially called 'Summer Music Scene', but the current name was adopted very quickly. The initiative is, in a certain sense, a continuation of the Thursday concerts organized by the Oratory of St John Bosco since 2014. The idea was born during a telephone conversation with Aleksandra Fleszar, a young artist. Firstly, it had to be an opportunity for the young bands to perform and, secondly, to give joy to citizens and tourists. And so every Friday evening in the summer there is a concert or a performance. The event was never stopped either by the rain, even before we bought the roof of the stage, nor by the pandemic, nor by other circumstances," he says.

These meetings offer unforgettable musical sensations, emotions, admiration and stimulate a reflection on everything that is born in the heart of man when he meets art. The proposal of beauty alongside the sacred, of culture alongside religion, is absolutely necessary for everyone, especially today, when many of us close ourselves to transcendence.