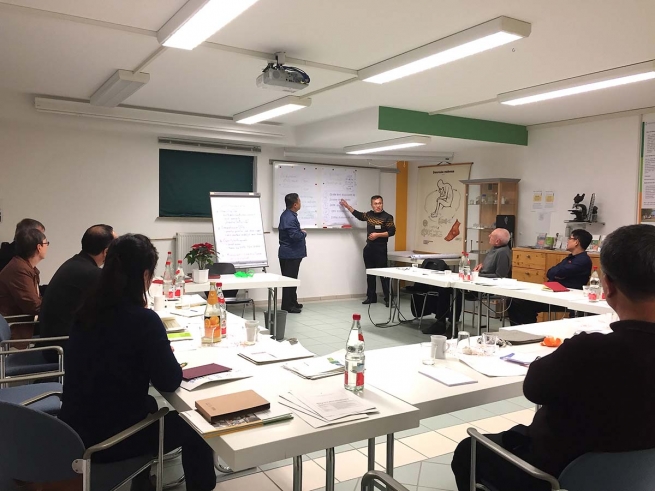 (ANS - Seoul) - 68 years after the end of the Korean War (1950-1953) and the "two Koreas" are still deeply divided. However, the Catholic Church of South Korea strives to act as a bridge and to contribute in every possible way to the evangelization of the brothers and sisters of the North. There is currently only one "official" place of Catholic worship in the Democratic People's Republic of Korea, with no resident Catholic priests.

In the 169th issue of the Korean Salesian Bulletin shines a reflection and a rather interesting challenge, written by the Provincial Delegate for missionary animation. Since the article is published in Korean, a brief summary is provided below:

It is surprising to know that up to now about 20 Korean Salesians of Don Bosco have been sent on missions to the 4 continents: Africa, Europe, Asia and Oceania. Even though not many of them have already returned home, they still carry with them their missionary experience, their dream and their missionary zeal in their "original mission".

Reflecting on Don Bosco's last missionary dream (1886) with the line “from Valparaiso to Beijing”, attention is drawn to the mission in North East Asia and in particular to North Korea. Although North Korea as a country is currently called "the most isolated hermit kingdom", Christians in South Korea have been preparing for their evangelization for many years.

Since 2010, a South Korean-based civil foundation called "Bom" (Korean for "spring") has been engaging in a joint venture with "Caritas Germany" to develop fairly effective professional support for the North Korean population. It is not based only on humanitarian aid, but also on the paradigm of 'boosting' North Korea's health services. Their partner is in fact the Ministry of Health of the Democratic People's Republic of Korea. Since 2010, a few million children have received their vaccine against hepatitis B and other frequent diseases and their activities are linked to 11 hygiene centers.

Above all thanks to frequent dialogue and some workshops in Germany organized by Caritas, mutual understanding is growing.

And what about the formation of new missionaries for the countries of Northeast Asia? Because of the common suspicion towards the clergy or religious of the Catholic Church, the future focus of this mission could be a solid formation of lay missionaries, with due specialization and deep evangelical and spiritual motivations.

Currently there are already around 30,000 North Korean refugees living in the South and many Christian and ordinary civil society NGOs are involved in their support in different ways. Even greater action of reciprocal exchange and solidarity with these organizations can be explored by the Salesian Family.