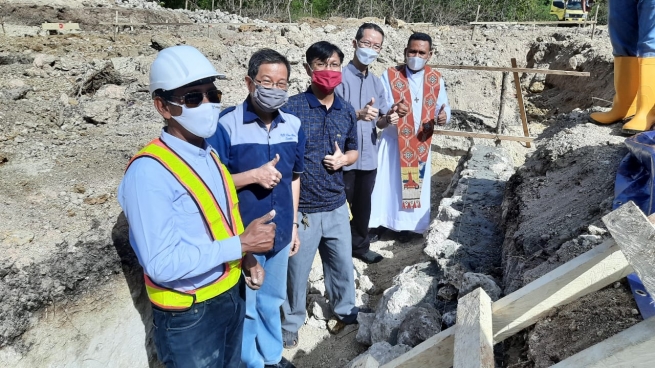 (ANS - Sumba) - In Sumba, a predominantly Christian island in the world's largest Muslim country, Indonesia, the Salesian presence is now 20 years old. The community, led by Fr Adie Prinanto Laurensius, animates the aspirantate, the pre-novitiate, a Vocational Training Center and a Secondary Technical School with an internship. Without forgetting that in Sumba there are also two communities of the Daughters of Mary Help of Christians, the first group of the Association of Mary Help of Christians (ADMA), and also the first organized center of Past Pupils of Don Bosco in the country. In this context of Salesian flourishing, new interesting initiatives are being reported, such as the expansion of the structures for the Technical School and the apostolate among young people to motivate them to care for Creation.

The laying of the first stone of the new structures of the Technical School took place last July 10 and was presided over by Fr Augustinus Bulu, CsSR, delegate of the bishop of Weetebula, Msgr. Edmund Woga, CsSR.

The expansion of the Technical School, through a new building, will allow it to accommodate 216 students, against the 140 that can currently be accommodated. This project had already been conceived five years ago and was carried out thanks to the commitment of the Salesian Vice Province "St Luigi Versiglia" of Indonesia together with the German Salesian NGO "Don Bosco Mondo" and the German government. The estimated time to complete the work is 10 months.

The new structure will not only allow to increase the number of beneficiaries of Salesian education, but will also improve the educational quality with more adequate equipment and spaces: currently, in fact, secondary school students still use the rooms of the Salesian religious residence.

On another front, a few days after this solemn event the Salesians of Sumba, together with several of their pupils, did their utmost to clean up the beach of Menanga Abba from waste. An initiative that was motivated by the reading and study of Pope Francis' encyclical Laudato sì, and they expect to repeat it in the future as well.

Twenty years after the opening of the Salesian presence in one of the poorest islands of Indonesia, in Sumba, the Sons of Don Bosco can indeed bear witness of the genuine charismatic impact aroused by this Indonesian "Valdocco".