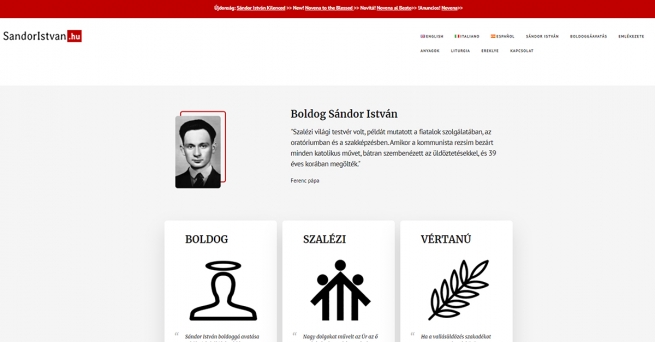 (ANS – Budapest) – If anyone searches the website sandoristvan.hu on the Internet he or she will be able to see the diligent year-long work on its being updated and refreshed. The website itself was first created immediately after Stephen Sándor's beatification in 2014.

Initially, the website was only in the Hungarian language; hence the resources regarding Blessed Stephen Sándor were accessible only in Hungarian. Thanks to the beatification ceremony, which spread the fidelity of Salesian brother martyr Stephen Sándor far and wide, all the resources concerning Blessed Sándor István were translated to foreign language: English, Italian and Spanish.

The scope of refreshing the website is to collect and put in one place: the writings, audios and videos that dealt with Blessed Stephen Sándor, the news regarding relic, the era of communism in Hungary, the new place of veneration of the blessed, the film and a song on Stephen Sándor, chronicles, roll-up pictures, etc. This effort of refreshing the website will enable easy access. Nevertheless, the website will continue to be renewed as there is a plan of collecting all the paintings, memorial works, institutions named after the Blessed, official documents, novena to Blessed Stephen Sándor and a virtual walk on the path that leads to different places connected to the life of the martyred brother.

All credit goes to Bro. Gábor Kirner SDB and Márton Csány who constantly contributed to the new look of the website: http://sandoristvan.hu/

Stephen Sándor  was born in Szolnok, Hungary, on 26 October 1914. Dedicated from a young age to the spiritual life and an animator of his peers, he learned about the figure of Don Bosco by reading the Salesian Bulletin and immediately felt attracted by the Salesian charism. He made his first profession on 8 September 1940, and excelled both in teaching vocational courses and in work in the oratory. In 1942 he was called to the front, and earned a silver medal for military valor. At the end of World War II, he committed himself to the material and moral reconstruction of society, dedicating himself in particular to poor young people, to whom he taught a trade.

On 24 July 1946 he made his perpetual profession and in 1948 he obtained the title of master-printer. When the persecutions of Catholic schools began, he had to flee and hide in the Salesian houses. In July 1952 he was captured and was never seen by his brothers again. He was hanged on the evening of 8 June 1953 in Budapest, but his execution was communicated only after 1990. The place of his burial remained unknown for a long time, but the memory of Stephen Sándor today is more alive than ever.