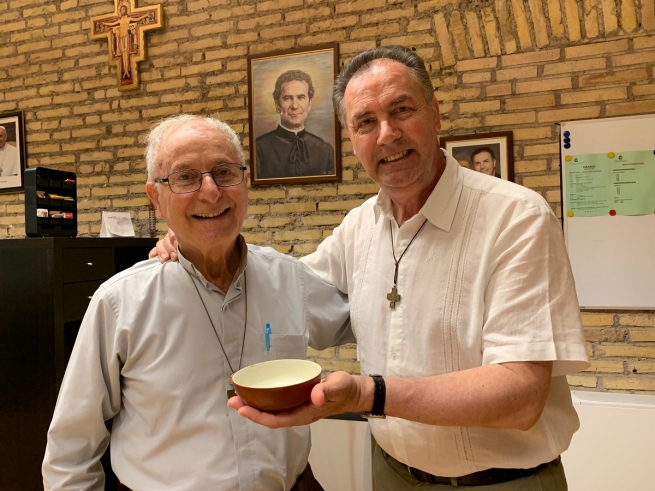 (ANS - Rome) – Several objects that the Servant of God Fr Luis (Luigi) Bolla used for over 25 years in the Eucharistic celebrations with the Achuar indigenous people, in Ecuador and Peru, were consigned to the Rector Major, Fr Ángel Fernández Artime, by Fr Vicente Santilli, a Salesian missionary in Peru.

“He used to get up at 3 in the morning to play the 'tuntui' and invite to the rite of the Wayús,” wrote Fr Santilli. “After taking the Wayús he participated in community conversations. At five in the morning, Christians, and all those who wished to, accompanied Yánkuam' (a term with which the Achuar natives called Fr Bolla, and which means "Twilight Light", Ed.'s note) to the chapel to participate in the Holy Mass, which was the center of his life.”

Among the objects that the Servant of God carried on his return journey from Lima to Kuyuntsa, the place of his mission, were the hosts, the wine, the chalice and the paten. “I saw him prepare for his return trips to Kuyuntsa,” says a Salesian missionary. “He had a backpack and took care of the hosts as if they were made of gold, putting them in plastic boxes, and wrapped the wine so that not even a drop would come out, because it would have to last for many months.”

The Rector Major, Fr Ángel Fernández Artime, in a letter sent to the Provinces, asked for a concrete sign of the Saints, Blessed and Venerables of the Salesian Family that can be exhibited in the new “Museo Casa Don Bosco House Museum” in Turin-Valdocco. And in response, Fr Manuel Cayo, Provincial of the "Santa Rosa da Lima" Province of Peru, immediately sent items used daily by Fr Bolla.

These articles were delivered on July 13th in Rome. Fr Á.F. Artime expressed his gratitude for these objects, especially for the paten, finely crafted and painted in the Achuar style. Together with this, the itip, a cloth woven by the Achuar, which the priest wears around his waist, was delivered to the Casa Don Bosco Museum; and also bracelets (senta), which are a sign of authority and are worn only during Eucharistic celebrations.

“The paten, the itip and the bracelets are signs of the presence of a Salesian who gave his life to the Lord in the midst of the Achuar and the Shuar for half a century, announcing the Gospel of love,” said Fr Santilli.