Italy – Rector Major in Mornese for Perpetual Professions and FMA anniversary: "When something comes from God, it remains in time" 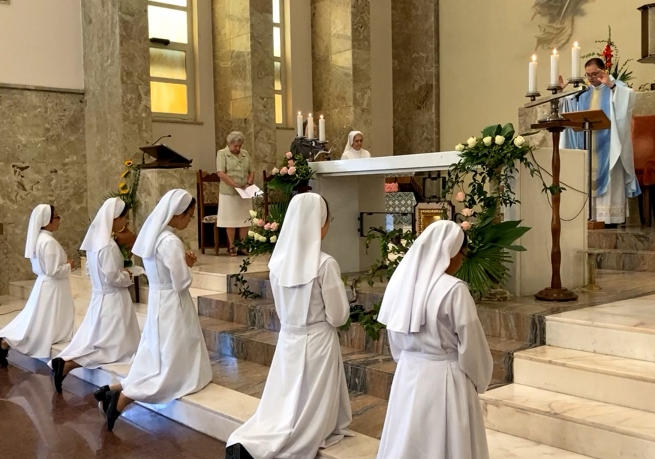 Yesterday's celebration also took on particular connotations, due to the opening of the last year of the three-year period of preparation for the 150th anniversary of the Foundation of the Institute, which will be celebrated next year, and of the XXIV General Chapter, which the FMA will celebrate starting from mid-September.

In the homily of the Mass, the Rector Major compared Mornese to other places of grace in which God has shown his attention and his fidelity to humanity, such as Mount Sinai, in relation to Moses, and to Nazareth, for Mary. In the same way, he stressed, "we can think of Mornese, a small village in the hills of Monferrato, where God spoke through his Holy Spirit, to arrive at this: to find a group of young people who, with all their discernment and the encouragement of Don Bosco and Maìn, Mother Mazzarello, wanted to be all for God and dedicate themselves to taking care of the lives of the poor and uneducated girls who lived here.”

And the proof that the foundation of the institute was willed by God, he added, is precisely in the fact that after so many years from those first young people, an institute spread over all continents, aimed at evangelizing, educating and bringing development to minors worldwide. “When something comes from God, it remains in time,” observed Fr Á.F. Artime.

After the homily, the rite of perpetual professions took place, during which five young religious from different backgrounds pronounced their "yes" forever in the Institute: they are Sister Sol Rafaella Moon and Sister Bomi Agnese Yi, from South Korea; Sr. Maria Suying Shang and Sr. Maria Xiaojie She, of the CSM Vice Province of the FMA; and of Sister Maria Louisette Ravonjinirina, from Madagascar.

After calling each one by name, at the end of the rite, Mother Reungoat said: "I welcome you with joy into our family" and she gave them a symbolic crown.

Currently the FMA Institute is made up of 11,225 sisters and has 310 novices. There are 79 circumscriptions (74 Provinces and 5 Vice Provinces), with 1,331 works in 97 countries around the world.