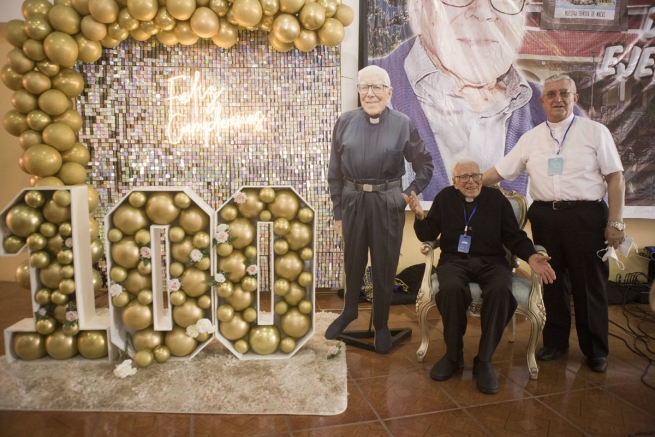 (ANS - Macas) - Fr Silverio Equísoain is a Spanish Salesian born in Zabaldika, Navarre, on 7 August 1921, and who therefore celebrated his 100th birthday last Saturday, not in his native land, but in his homeland of adoption, Ecuador. In Macas, where he has resided since 2008, the Salesian community, with its Director, Fr Luciano Bellini, prepared a tribute in his honor, which began with the Eucharist presided over by the Provincial, Fr Francisco Sánchez. At the end of the celebration, a fraternal agape was held, which was also attended by Msgr. Néstor Montesdeoca, SDB, Apostolic Vicar of Méndez, his Salesian confreres and various people related to Fr Silverio.

Fr Silverio arrived in Ecuador by boat, after a 15-day sea voyage. He landed on the island of Punà, where he was welcomed by the Provincial of the time, Fr Felipe Palomino, and by Fr Cayetano Tarruell. “They knew how to excite and encourage me; I started by settling in Guayaquil, then I went to Cuenca and stayed there for a month. Then the Provincial told me to go with him to Limón, Morona Santiago; there I began my work in the missions, ” he recalls.

He arrived at the Limón mission on 1 December 1955; his first year was spent learning the Shuar language and getting to know the various mission centers. “Little by little,” continues the centenary Salesian, “what was known was transmitted and at the same time one learned about their culture; I was very happy to have to walk in the middle of the jungle, it strengthened me and encouraged me more; I gave myself completely.”

Before a year had passed, he was transferred to Gualaquiza and put in charge of the mission, which was like a parish. Taking advantage of his talents, he made drawings for the construction of the chapel and the schools, and did some architectural work. There he spent three years, then returned to Limón for another six, where he expanded the work and began renovations, and with more contact with the indigenous Shuar, he began to organize the centers.

In an interview published in the Salesian Bulletin of Ecuador in 2011, Fr Silverio expressed some of his strongest convictions, underlining that it is not important to think about oneself, but rather to help the most needy: “To Know yourself well and understand your own inner faith, not to keep selfishness, but to give oneself to others; Jesus, our Lord, invites us to follow him as apostles and this is my vocation. Sometimes young people bite on one side or the other, out of curiosity and lack of constancy; instead the decision must be firm.”