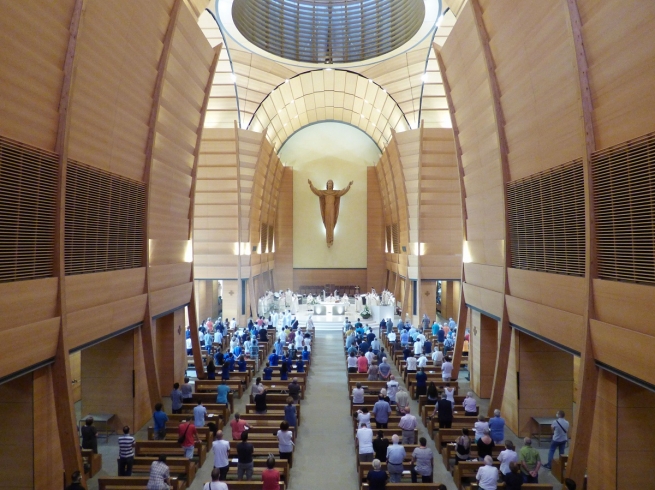 (ANS - Turin) - August 16 is always a special feast day for the Salesian Family: it is, in fact, the day on which the anniversary of Don Bosco's birth is celebrated. This year, in his birthplace, the 206th birthday of the Saint of Youth was celebrated with a solemn Eucharistic concelebration presided over by the Rector Major's Vicar, Fr Stefano Martoglio, with the wonderful participation of many priests, including Fr Ivo Coelho, General Councilor for Formation.

Also present were Fr Giuliano Giacomazzi, Fr Leonardo Mancini and Fr Stefano Aspurati, Provincials of the Lombard Emilian Province (ILE), of the Special Circumscription of Italy Piedmont and Valle d'Aosta (ICP), and of the Salesian Circumscription of Central Italy (ICC).

There were also many young people from the area's various oratories who took part in the celebrations to pay homage to Don Bosco.

During the celebration, after bringing the greetings of the Rector Major, Fr Ángel Fernández Artime, Fr Martoglio illustrated a few biographical notes of John Bosco's life, then moved on to the commentary on the Gospel according to Matthew, which stands out as a defense of the innocence of infants and children.

Like every year, the celebration of Don Bosco's birth is also an opportunity to remember the dynamics of the Salesian charism that, having developed on this hill at the time almost unknown, then expanded and spread throughout the world, benefiting many young people. Even today, after so many years, thousands of children are growing up receiving the educational mark of Don Bosco.

The celebrations were also animated by the group of pre-novices of Europe, who are in Turin, some to attend an Italian course and others for their meeting, which ended just yesterday. The pre-novices enlivened this beautiful celebration with song and liturgical service. Also present at the event was the mayor of Castelnuovo, Antonio Rago, who joined the celebrations along with many other friends of the work.