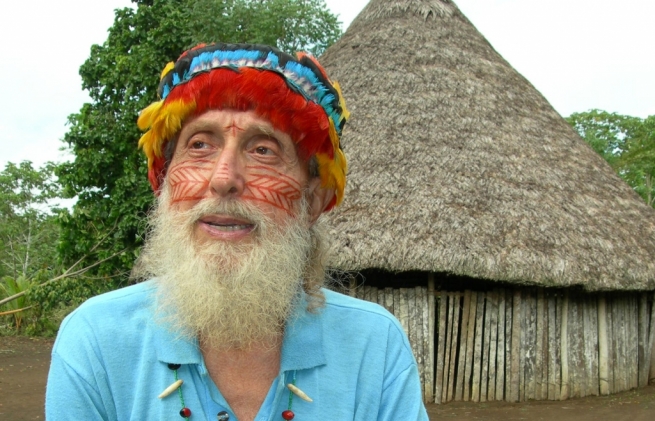 (ANS - Lima) - On 12 August 2021, the Archbishop of Lima, Monsignor Carlos Gustavo Castillo Mattasoglio, issued the "Edict of Introduction of the Cause of Beatification and Canonization of the Servant of God Luigi Bolla (1932-2013)". Fr Bolla was a professed priest of the Society of Saint Francis de Sales, who gave his life for the Achuar people on the Amazonian border between Peru and Ecuador.

The Archbishopric of Lima invited all the faithful to provide useful information and documents (letters, writings, etc.) regarding the Cause, to be presented to the Diocesan Tribunal of Lima. The Edict, which will be kept for two months in the Cathedral of Lima, will then be communicated to the Apostolic Vicariate of Yurimaguas (Peru), to the Apostolic Vicariate of Méndez (Ecuador) and to the Diocese of Vicenza (Italy).

Yánkuam 'Jintia, “Light of Twilight”, the name given by the Achuar people to the man who walked day and night with them for decades, is thus a step closer to Beatification.

Fr Bolla dedicated his life to evangelization, enduring harsh living conditions, always alongside the Achuar brothers, located on the border between Peru and Ecuador, several days' journey from Yurimaguas, the nearest city, located in eastern Peru.

“This news causes great joy not only among the members of the Society of St. Francis de Sales,” explains REPAM (Pan-Amazon Ecclesial Network), “but also throughout the Vicariate of Yurimaguas and the Amazonian Church, since Father Luigi Bolla was a great missionary example who, with his unique and prolific life testimony, inspires the new paths of the synodal Church, outgoing and intercultural, that Pope Francis requests.”