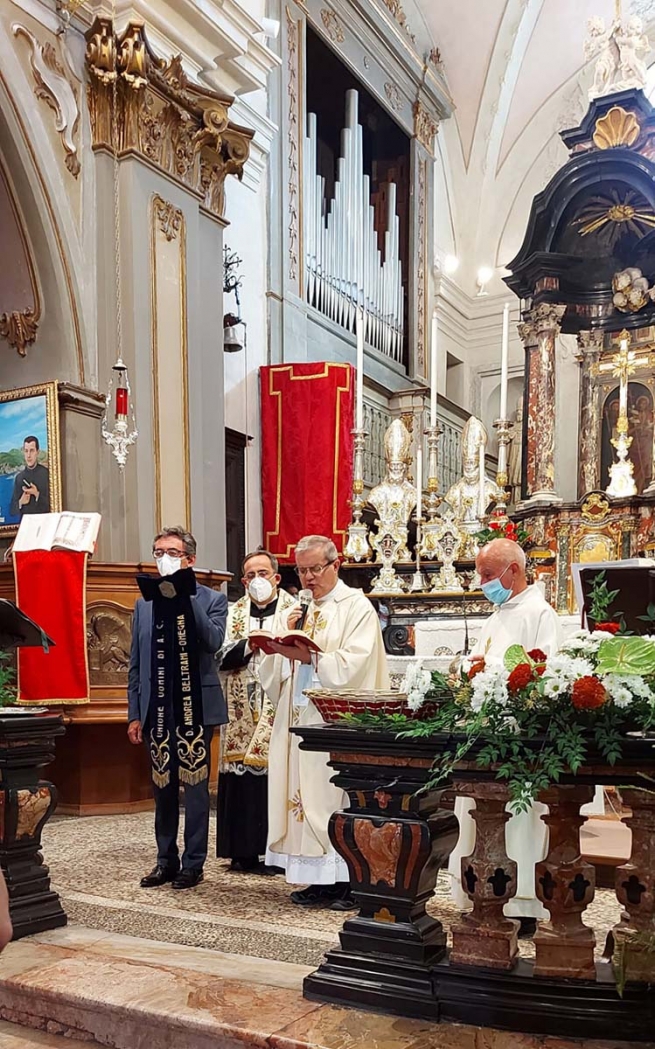 (ANS - Omegna) - The civil and ecclesial community of Omegna (Verbania) holds dear the memory of its illustrious son Fr Andrea Beltrami, a Salesian of Don Bosco. Recurring this year is the centenary of the transfer of the mortal remains of the young Salesian priest from the cemetery of Omegna to the Collegiate Church of Sant'Ambrogio, which took place on 26 April 1921, on the occasion of the patronal feasts of San Vito; thus they wished to remember Fr Beltrami and his testimony as a man of hope and faith.

The monument that preserves the remains of Fr Beltrami bears this inscription: “The Servant of God ANDREA BELTRAMI, Priest of the Pious Salesian Society. He died in Turin, at the tomb of Ven. Don Bosco, on December 30, 1897, in the concept of holiness. The venerated body was kept in Omegna, in the family tomb, from January 2, 1898 to April 26, 1921, when, by decree of the Sacred Congregation of Rites, it was piously transferred to this Parish Collegiate, where it reminds fellow citizens of sublime Christian virtues." And the chronicle of the time adds that despite the secrecy surrounding the transfer and the closing of the cemetery gates, the people, having learned of it, burst inside en masse, proving the high reputation of holiness in which his fellow citizen held him.

This veneration for Fr Beltrami has not died out. Indeed, in recent years, thanks to the commitment of the parish community, led by Mons. Gian Mario Lanfranchini, and the municipal administration, it has renewed itself with various religious and social initiatives. On Sunday 22 August in the solemn Mass presided over by Fr Pierluigi Cameroni, Postulator General for the Causes of Saints of the Salesian Family, it was underlined how Fr Beltrami knew how to live God's choice in every moment of his life, especially in the hour of trial and sickness with great faith and abandonment in God. “Beltrami,” said Fr Cameroni, “made his cross a helm, his suffering a hope, so that nothing and no one could separate him from the redemptive love of Christ."

For the occasion, new medals in honor of the Venerable Andrea Beltrami were blessed and a new painting by the painter Barbara Piana was unveiled and presented.