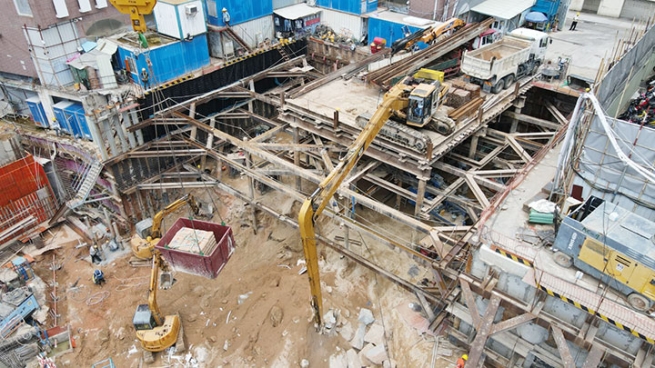 (ANS - Macao) - In Macao, just 15 months after the presentation ceremony of the project, one can already see the great work taking place within the construction site which will lead to the expansion of the first Salesian school in the East Asia-Oceania Region (1906). In fact, the new buildings being built will form part of the Salesian Institute in Macao, which is growing rapidly.

The inaugural ceremony of the project took place on May 24, 2020, and despite the Covid-19 pandemic, the dean of the Institute, Fr Joseph Chow Pak-Fai, managed to get the expansion project started.

The redevelopment of the Institute involves the demolition of the old structure, built in the 1920s, and the subsequent reconstruction of a new 7-storey building. The entire project should be definitively completed by the year 2024.

Thanks to the images provided by Fr Francis Hung, we can see the progress and follow the rapid development. This is a particularly challenging period for the CIN Province and many are mobilizing to support this huge effort. At the forefront are the Past Pupils, who are organizing various events aimed at raising funds.

Despite the continuous reconstruction operations, the Primary and Secondary School of Macau have not stopped. In fact, even in the month of June, the graduation ceremonies took place in the presence of the Dean and the President of the Past Pupils.

“We give thanks to God for this rapid and problem-free building development, during the first year of reconstruction,” write the Salesians of Macao. “We pray for God's continued protection in renewing Don Bosco's work in Macao.”

To allow everyone to participate in the reconstruction and expansion works, a short video was also produced, lasting two minutes, in which we are given a complete view of the construction sites. Through a bird's eye perspective, in fact, one can witness the rapid growth of new buildings.

The video is visible at the following link.