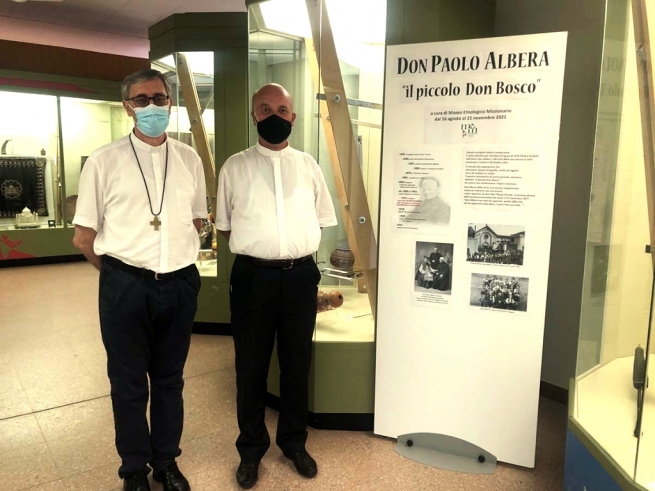 (ANS - Turin) - A simple temporary exhibition has been set up at the Ethnological Missionary Museum of Colle Don Bosco to commemorate the figure of Fr Paul Albera, the 2nd Successor of Don Bosco, precisely in this year that celebrates the 100th anniversary of his birth in heaven, which took place in Turin on October 29, 1921.

It is a small exhibition which, through some images, writings and objects, aims to make known this great Salesian, defined as "the little Don Bosco" by all those who had admiration for the Salesian Work.

Given the context in which the exhibition is physically located, it was decided to develop above all the missionary aspect.

Three elements that make up the set-up:

• the images that illustrate some moments related to the journey he embarked on to visit the Salesian Missions of America, the meeting with the Bororo Indians of Brazil, with those of Tierra del Fuego (the Land of Fire), but also with the great pioneers of the missions such as Card. Giovanni Cagliero, Mons. Giacomo Costamagna, Fr Giovanni Balzola;

• objects from the collection of the Missionary Ethnological Museum. It is an "indirect" link that unites the objects on display and the figure of Fr Paul Albera in this temporary exhibition dedicated to him. Among the approximately 10,000 pieces that make up the entire collection of the Museum, there are no objects he personally collected. Those that the visitor can admire in the window were selected from the collections brought by some Salesians that he himself sent during the missionary expeditions organized in the course of the years of his Rectorate (1910 - 1921).

The exhibition was completed to coincide with the 206th anniversary of the birth of Don Bosco. A "birthday present" to honor this son of his, of whom he had a far-sighted vision, so much so, as to indicate him as his successor as the head of the Salesian Congregation.

On August 16, 2020, among the first visitors, there was also the Vicar of the Rector Major, Fr Stefano Martoglio, accompanied by the Director of the Colle, Fr Gianni Rolandi.

It is possible to visit the exhibition until 21 November 2021 during the opening hours of the Museum, which are available on the website www.memcolledonbosco.it or on the Facebook page @MuseoMissionarioColleDonBosco.