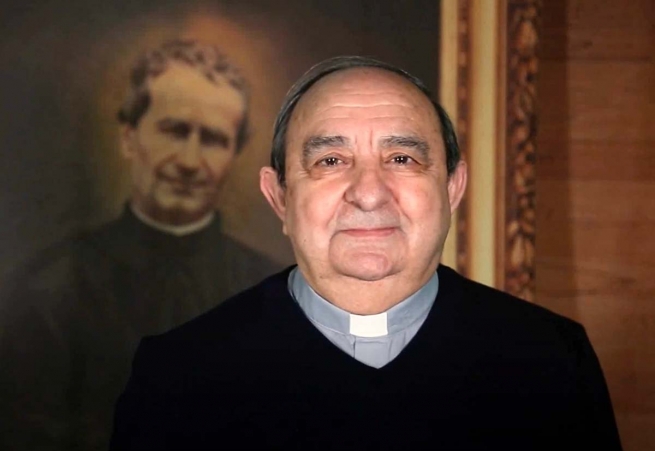 (ANS - Rome) - Fr Eusebio Muñoz, SDB, passed away at noon yesterday, 1 September 2021, at the "San Carlos" Clinical Hospital in Madrid. He was the Director of the Salesian Mission Office in Madrid and the former Central Delegate of the Rector Major for the Secretariat of the Salesian Family. After defeating Covid-19 a few months ago, he suffered a stroke and developed subsequent infection, which ultimately led to his death. With 76 years of age, 59 years of Salesian life and 49 years of priesthood, a Salesian with a capital "S" has left us. He was a man endowed with an overwhelming personality and great intelligence, who was and remains loved as a father from the many people lucky enough to to have lived with him.

Fr Muñoz was born on 26 December 1944 in Pozoblanco, a Spanish town near Córdoba where the Salesian charism has ancient roots and which penetrated deeply into the soul of the young Eusebio. He completed his novitiate in San José del Valle and made his first profession on 16 August 1962 and his perpetual profession on July 26, 1968 and was ordained a priest on July 22, 1972.

Many houses in his Salesian Province of origin, dedicated to Saint Dominic Savio and based in Cordoba, witnessed his vocational enthusiasm. Over the years, he was Director in Ronda, Montilla, of the aspirantate of Cordoba, in Sanlúcar la Mayor, in Granada-Cartuja. Also, he served as Novice Master, Delegate for Youth Ministry and Vocation Animation, Delegate for the Salesian Family, served as a Formator, a Provincial Vicar and Provincial during 1990-1996. Having also obtained a masters degree in Economics, he also chaired the Board of Directors of the Spanish Salesian Catechetics - CCS for 18 years.

Having performed this service with zeal and effectiveness, in 2020 he was entrusted with another role of great importance, the leadership of “Misiones Salesianas”, the Salesian Mission Office of Madrid.

Today many people - Salesians and lay people from the various groups of the Salesian Family - mourn his passing away:

"Vital, cheerful, affectionate, a very skilled conversationalist, a profound companion, generous to the extreme, he has carved in our life a journey of deepening in the Faith, which has allowed us to encounter the risen Lord, through his life, his testimony, his word.”  (Ignacio Vázquez de la Torre, Salesian Cooperator of Cordoba).

"My heart is heavy because I've lost a loving father, who loved me so much and whom I will miss so much ... He was truly and up to the end a Salesian Pastor with the heart of Don Bosco." (Fr Anthony Lobo, Indian Salesian, student of Fr Muñoz at UPS).

“He found the right word for each one, had a great capacity for analysis and synthesis and an enviable serenity. At his side, one always felt at ease and at peace. He had the rare art of appreciating each person, recognizing their values ​​and qualities, giving affection and security. All this explains why he was a great formator of Salesians and young people.” (Fr Juan Andrés Fuentes Amezcua, Spanish Salesian, Fr Muñoz's classmate).

"Surely Mary Help of Christians and Don Bosco are welcoming him to Heaven as he deserves!" (Ángel Gudiña, a close collaborator of Fr Muñoz in his years spent in Rome and at the Madrid Mission Office).

Lastly, we report the moving comment of the Rector Major, Fr Á.F. Artime: “Fr Eusebio was a true father for many Salesians, an authentic son of Don Bosco, always generous and reliable in the tasks he carried out. He was also a great brother and friend to me. We can only thank God for the great good he has done to the Congregation and the Salesian Family and, above all, for the great gift of his life.”