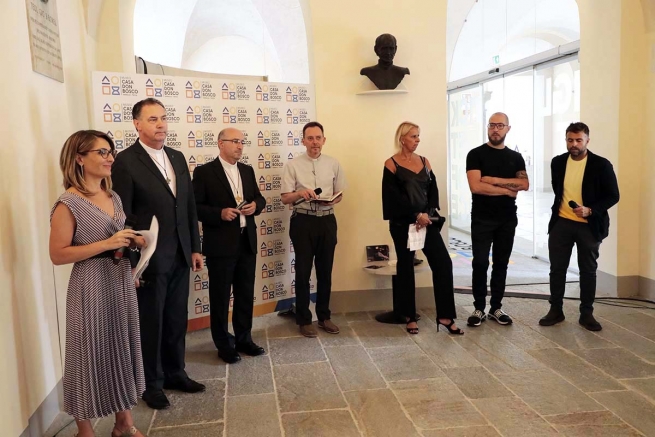 Present at the inauguration were the Central Delegate of the Rector Major for the Secretariat of the Salesian Family, Fr Joan Lluis Playá; Fr Giuseppe Costa, Co-spokesperson of the Salesian Congregation; Fr Leonardo Mancini, Provincial of the Special Circumscription -ICC "Italy - Piedmont and Valle d'Aosta"; the Director of the Museum, Stefania de Vita, who moderated the meeting; and Fr Cristian Besso, the Director of the project "Don Bosco House Museum".

“Today is the day in which we can say that the reality of the Don Bosco House Museum finishes all its works and commitments. In fact, till now a very important part was missing, namely that of show casing the life and the reality of the many who took Don Bosco's charism and passed it on all over the world,” added the Rector Major.

“Here we find a 'marvellous rainbow' of people: there are not only the Salesians, but many Past Pupils of incredible social capacity, some martyrs who have marked these ideals with their life and blood, many women, consecrated and lay persons.” Without forgetting the privileged space dedicated to Saint Mary Domenica Mazzarello, Co-founder of the Daughters of Mary Help of Christians, Fr Angel highlighted her personality as one “with whom Don Bosco understood that he could carry on the great dream for girls.”

On the sidelines of the opening of these two rooms, the Rector Major also inaugurated the temporary photographic exhibition "Lock art", created in collaboration with "ArtFullFrame", which exhibits pictures of 15 photographers from all over the world, who have tried to narrate the beauty of relationships and the "extraordinary in the ordinary" experienced in times of lockdown and pandemic. For the occasion, the Artistic Director and Project Manager of "Lock Art", Chiara Candellone Sticca, and photographers Claudio Gottardo and Gabriele Zago from Turin, intervened offering their testimony.

At the end of the event, the participants were able to visit the Museum's new rooms and tour the exhibition.

The photos of the inauguration are visible in the Photo Gallery section, while the video of the event is available on the ANS Facebook page.