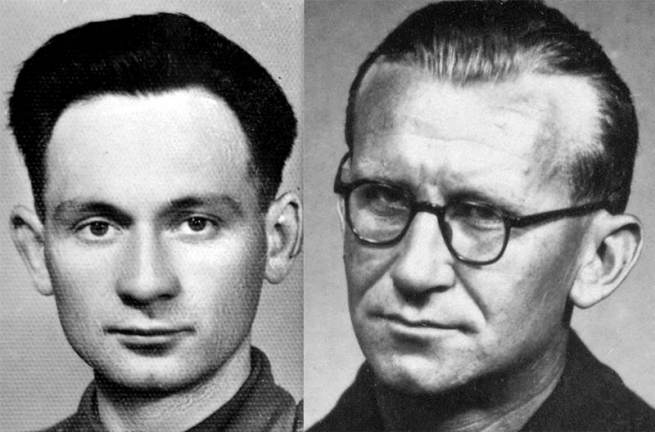 (ANS - Rome) - In the Angelus of Sunday 5 September, Pope Francis announced his upcoming trips to Hungary and Slovakia and entrusted them "to the intercession of so many heroic confessors of the faith, who in those places bore witness to the Gospel amid hostility and persecution. May they help Europe to bear witness today also, not so much in words, but above all in deeds, with works of mercy and hospitality, the good news of the Lord who loves us and saves us."

Among the heroic confessors of the faith, two martyrs of the Salesian Family linked to these two Nations deserve to be remembered: Blessed Stephen Sándor (1914-1953), Hungarian Salesian Brother, victim of the strong anti-religious repression of the Communist regime, beatified in Budapest on 19 October 2013; and Blessed Titus Zeman (1915-1969), a Salesian priest, Slovak, martyr for vocations, beatified in Bratislava on 30 September 2017.

Stefano Sándor participated with the altar servers he was animating at the International Eucharistic Congress held in Budapest in 1938. That time the Rector Major of the time, Fr Pietro Ricaldone, was also visiting Hungary, who, impressed by the group of altar servers led by that young coadjutor, exclaimed in Latin: "Admirabilis, inimitabilis". This group of boys had about a hundred members. The animation of the altar boys by Stefano Sándor was not limited only to the service at the altar, but required participation in a serious spiritual formation, through prayer, singing and regular attendance of the liturgy. The boys also spent their free time together. Love for Jesus in the Eucharist will lead Stephen Sándor to give his life especially for the Hungarian youth.

Titus Zeman, born into a family particularly devoted to Mary, like all Slovaks cultivated devotion to the Virgin of Sorrows, venerated in the Shrine of Šaštín. In 1925, when he was 10, he wanted to reach it on a pilgrimage. But, being sick, he had to give it up. He then asked the pilgrims to remember him, while he would pray from home. A few days later, when they were back, he obtained permission from his father to be brought to the doorstep: he thus wanted to participate in the blessings brought by the pilgrims. For Tito, however, it was enough to glimpse the cross that opened the procession from afar to satisfy his desire. He then went back into the house: in those few moments something great had happened.

In fact, Titus was healed through the intercession of the Holy Virgin. In the previous days, without informing his parents, he had promised her that, in case of recovery, "he would become her son forever". In these singular words, Titus had summarized a firm intention of consecration. And since the previous year, the Salesians had inaugurated their first Slovak house at the Shrine of Šaštín, Tito decided that he would become a Salesian priest: the house of the Salesians, so he argued, is the house of Mary!

Entrusting himself to Mary and animated by the apostolic spirit of Don Bosco, he will offer his life for the salvation of vocations, facing persecutions and obtaining the palm of martyrdom.