Georgia – Bearing witness of love to young people for 34 years 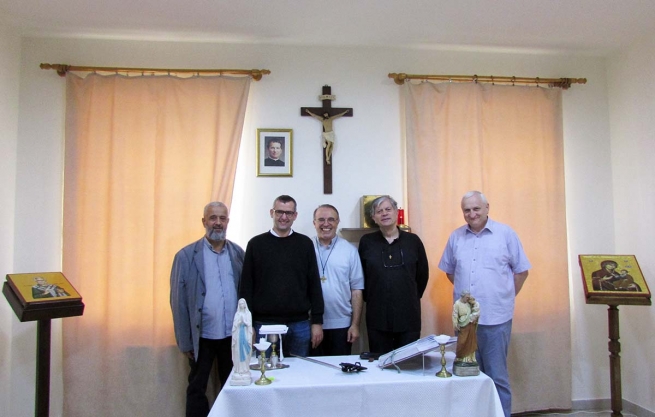 (ANS - Tbilisi) - 34 years after the arrival of the first Salesian in Georgia, it is possible to say a great "thank you" to God for the humble, yet, significant contribution that the Sons of Don Bosco offer to the young people and society of this country of the Caucasus. There are currently five Salesians in Georgia, originating from Ukraine, Poland and Italy, who are committed to the local Church and the education and social promotion of young people. Now, even as the community is being animated by Fr Václav Klement, the Extraordinary Visitor "ad nutum" and "pro tempore", in Tbilisi, the capital of the country, the construction of the first Salesian house in the country has begun.

The construction site is located in the “Didube” district, near the “Gotseridze” subway station, not far from the “Caritas Georgia” headquarters, where a vocational school, an oratory and the residence of the community are now under construction. The Salesians have been waiting for more than two years for the municipal authorizations for the construction, which finally arrived on 16 August 2021, precisely on the birthday of Don Bosco. Thus, during his Extraordinary Visitation to Tbilisi, part of the Poland-Piła Province (PLN), Fr Klement was able to share in the joy of the Salesians being present on the location.

Having arrived in the country when Soviet Union was still in existence, in 1987, the first Salesians worked in two Armenian rite parishes, entrusted to the Salesians - Turtzh, until today; and Tzhaltbila, until 2019 – and carried out various social works for the poor and the disabled, thanks in particular to the work Fr Witold Szulczynski, as the head of "Caritas Georgia" and is today the Director of the Salesian community.

After the pioneering period (1987-2015) in which the Sons of Don Bosco engaged in the apostolate in various places, with the canonical erection of the religious community, the work is moving towards a community missionary project, accompanied by the Province of PLN, under the guidance of its Provincial.

In fact, since the dissolution of the EST Circumscription in 2012, the Salesian presences of individual Salesians in Georgia have become part of the PLN Province - even though the closest Salesian community is located in Azerbaijan, in Baku, in the Apostolic Prefecture entrusted to the Salesians of the Province of Slovakia (SLK).

In the context of the Catholic diaspora in Georgia, made up of 3 rites - Armenian, Syro-Chaldean and Latin - and in the midst of a population that is 90% Orthodox, the missionary presence of the Salesians for young people has great significance.

Besides the Salesians, in Georgia there are also two small communities of the Daughters of Mary Help of Christians, in Tbilisi and Turtzh, who animate the work for kindergarten children and collaborate in the youth ministry in the parishes.

Since their arrival in Georgia, two popes have already visited the country, John Paul II (1999) and Pope Francis (2016); but the Salesians hope soon to be able to welcome the Successor of Don Bosco for the first time.