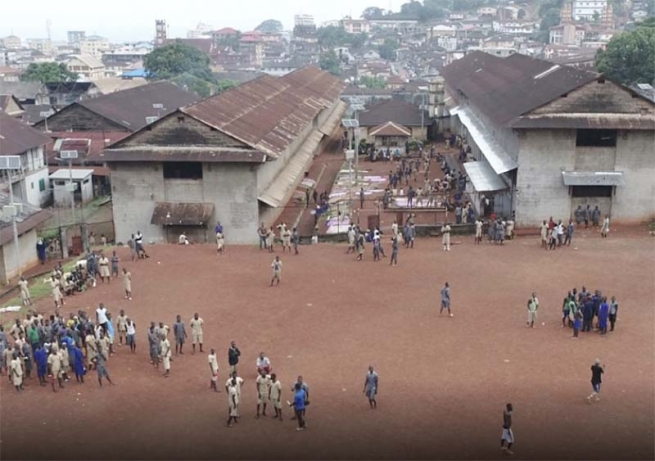 (ANS - Madrid) - Yesterday, Thursday 16 September, 2021, the Auditorium of the "Espacio Fundación Telefónica" in Madrid hosted the presentation of the "Inocencia entre rejas" (Innocence behind bars) campaign by the Salesian Mission Office "Misiones Salesianas" accompanied by the presentation of the documentary film “Libertad”, which denounces, through the example of the Pademba prison in Freetown, Sierra Leone, the situation of minors serving sentences in prisons with adults. The harsh images and testimonies of the Salesian Fr Jorge Crisafulli and of Chennor, a young man who was imprisoned in that prison as a minor, were at first shocking for the story they told, but then turned into applause for the hope they gave. Given the limitations due to the pandemic, only 100 people attended the event, but the live streaming has brought the documentary and the testimonies of the protagonists to thousands of people around the globe.

The event was hosted by television presenter Javi Nieves, who began by clarifying that "with the documentaries of 'Misiones Salesianas' you never leave the same as when you arrived. They are a plunge into reality on situations closer to us than we think."

After the screening of "Libertad", the director of the documentary, Raúl de la Fuente, intervened and thanked Misiones Salesianas "for allowing him to tell this story, which makes it his most special documentary." He encouraged everyone to continue to work to ensure that there are no more minors in prison.

In the following interview, the young Chennor described how his hell began: “I lost my father when I was 8 and I was sent to my aunt, who mistreated me. So, I decided to survive on the street. But was jailed as a minor for vagrancy. When I got out, I fell into fights, thefts and drugs and went back to prison until I ended up in Pademba, where I was abused in every way when I was still a minor.”

Yet, after so many traumatic experiences, Chennor said he was “happy, for having changed my life, by the grace of God and Don Bosco; and happy to be able to help other minors like me to get out of prison. This is my dream.”

Fr Crisafulli added that when he watches the documentary “I feel happy: because if it is true that what we see is hell, it is also true that we are dealing with stories of redemption, and we are able to transform hell into a small corner of paradise."

For this, he urged to support "Misiones Salesianas" and to do so, "not only with money, but also by offering time, talents and by sharing this reality with our families and friends and by committing ourselves to transform it."

From 20 September “Libertad” will begin a one-month tour in schools, universities, and various large institutional locations in Spanish and European cities.