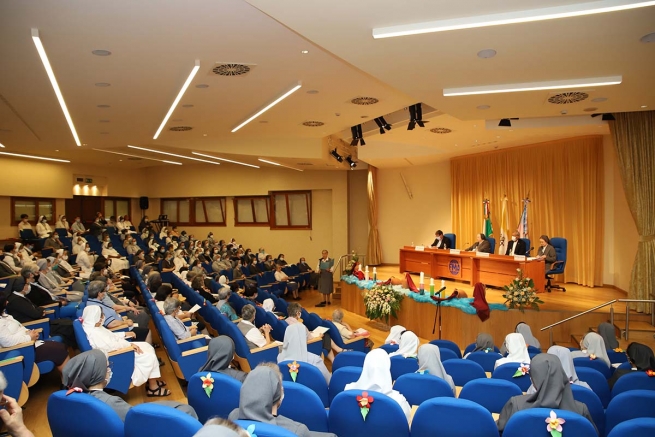 (ANS - Rome) - The 24th General Chapter of the Institute of Daughters of Mary Help of Christians was officially inaugurated last Friday, 17 September 2021, at the Generalate in Rome. At 7 am Fr Pascual Chávez Villanueva, Rector Major emeritus, presided over the Eucharistic celebration; then in a colourful opening ceremony Mother General, Mother Yvonne Reungoat, officially opened the GC XXIV of the FMA, on the theme: "’Do whatever He tells you’"(Jn 2:5): Communities that generate life in the heart of the contemporary world".

In his homily during the Mass, Fr Chávez encouraged the assembly to live this time of grace in docility to the Holy Spirit: “He is the witness of Jesus and it is He who makes us witnesses of Christ. May He be the main protagonist of this event of grace so that the Chapter may be a true charismatic Pentecost.”

The colour-filled opening ceremony began with the entry of the flags of the 97 countries in which the FMA Institute is currently present. Then Mother Reungoat, in her welcome address, retraced the journey and the processes carried out for the GC’s preparation, and enthused the capitulars with these words: "Generativity is the mission of Mary. We need to live a true experience of a fruitful meeting with new seeds of life to start afresh from here, regenerated, with passion and enthusiasm to generate new life in our communities and in the educational mission.”

Cardinal João Braz de Aviz, Prefect of the Congregation for Institutes of Consecrated Life and Societies of Apostolic Life, who presided the inauguration of the chapter, praised the preparation of the Institute for the GC. He, in his address, indicated the following ingredients for carrying out the synodal journey: fraternal life in community, listening and dialogue, sisterhood, openness to other charisms, service of authority, obedience to Jesus and ecclesial life.

Then the message of Fr Ángel Fernández Artime, Rector Major, was read. He encouraged everyone to live the chapter experience by listening to the Word and in discernment, to respond as consecrated daughters of Don Bosco and of Mother Mazzarello, to revitalize the Salesian charism.

Sr. Chiara Cazzuola, the Moderator of GC XXIV, then initiated the reading of messages of various groups of the Salesian Family (Past Pupils, Salesian Cooperators, Association of Mary Help of Christians, Volunteers of Don Bosco, Volunteers with Don Bosco), as well as those from 'VIDES', the Salesian NGO, and of the young people of the Salesian Youth Movement (SYM) in Europe and the Middle East.

Representing the SYM and reflecting on his experience with the FMA, Paolo Osorio observed: “Perhaps many young people at the beginning react by saying that they do not need religion or God. But when they encounter an authentic community like yours, which lives the reality of bearing witness  through a gift of oneself as both a journey and accompaniment, then, their attitude changes. On behalf of the young people of the world, I have only words of thanks. Thanks for everything. May you feel the accompaniment of our prayers during this chapter experience.”