Haiti – A Month After, a Sombre Picture Still 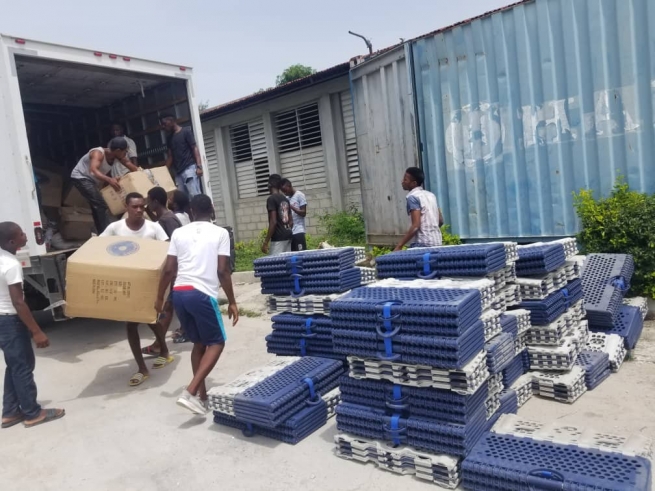 (ANS – Port-au-Prince) – On August 14, 2021, a new earthquake, measuring 7.2° on the Richter scale, devastated the southern Haiti. More than a month later, the situation remains alarming. Many people have lost hope and the response of the authorities has been insufficient with respect to their needs. The Salesian Family, for its part, does what it can.

To date, the partial death toll is over 2,200, with 330 people missing and more than 12,700 injured, according to civil protection officials. In addition to the loss of life, some 53,000 houses have been destroyed completely and over 77,000 damaged.

This toll is far from reflecting the reality in the eyes of many people, because until now, some remote areas are still inaccessible to investigators and some cases have not been reported, according to some local authorities, including the mayor of Camp-Perrin, Fénicile Massius.

In addition, thousands of disaster victims are living in camps. Hospitals are still working and government coordination of humanitarian aid is still pending. Private organisations, religious congregations and volunteers are providing humanitarian assistance to the victims in the absence of support from the state, even though there are not enough of these agencies.

In terms of post-earthquake response, the first stage of rescue was completed only in the second week of September. Since then, demolition operations have been started. Agents from the Ministry of the Interior and Territorial Collectives (MICT) are identifying houses to be demolished with a red mark, those that deserve to be repaired with a yellow mark and those that, according to the inspectors, are intact with a green mark. Thus, the Armed Forces of Haiti (FADH) and agents of the Ministry of Public Works, Transport and Communications (MTPTC) have already demolished several buildings in the South, including schools, churches and private homes. The demolitions still continue. The southern metropolis is disfigured while reconstruction sites are still non-existent. It should be noted that according to a note communicated by the municipal authorities of Les Cayes, no repair or reconstruction activities have been authorised till14 September, even one month after the earthquake.

Since the earthquake, religious congregations, private organisations and voluntary households have been the only ones to provide assistance to the victims. This is the case of the Salesian community of Don Bosco in the South, which has already made three rounds of distribution. The Rector of the community, Fr Cazy Guilteau, says that they has already assisted around 2,500 victims. The last distribution was carried out on 11 September in partnership with the Tzu Chi Foundation.

The community of the Daughters of Mary Help of Christians, for its part, has already assisted nearly 2,000 victims in three cycles of distributions, according to the director of the work, Sr Aline Nicolas FMA. Despite the fact that her school was completely destroyed, she is very concerned about the situation of the victims and is calling on benefactors to continue to assist the victims. "We don't want to keep them in continued dependence, but at the moment they are really in need," says Sr Aline. At the same time, the Tzu Chi Foundation has been one of the most active international organisations in the southern metropolis this past week. In partnership with local institutions, it has distributed bags of rice and other food kits to thousands of victims.

The situation is not too different in the other communes. The mayor of Camp-Perrin, Fénicile Massius, says that state representatives have only contacted her as part of an investigation. "If nothing is done in the next few weeks, some people will starve," she said.

Faced with the overwhelming situation in the southern region of the country, the start of the school year announced for 4 October is still at a standstill. School headmasters whose schools are totally destroyed or heavily damaged are concerned about this date.

Many people are asking themselves: “in how many years will the southern region, particularly the town of Les Cayes, be able to emerge from this slump?”