Italy - Fr Antúnez, New President of "Mission Don Bosco", introduces himself: "I live this new experience as a gift, am happy to be a Salesian" 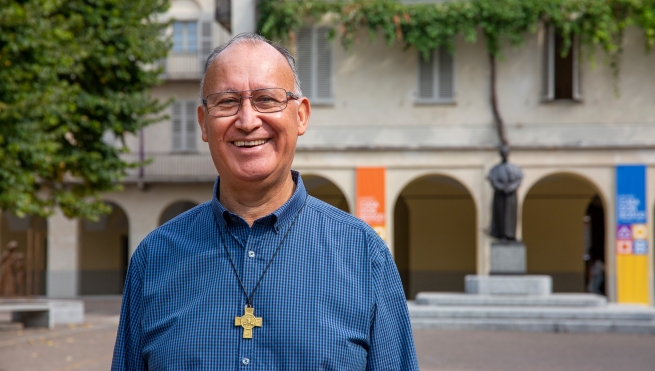 (ANS - Turin) - It was last May 18 when the Rector Major, Fr Ángel Fernández Artime, appointed Fr Daniel Antúnez, an Argentine Salesian, as the Procurator of “Missioni Don Bosco”, the Salesian Mission Office at Turin. On September 1, Fr Antúnez officially began his assignment and introduced himself today.

So far his first commitment has been to get to know Italian culture and context, having been catapulted from Argentina – has become almost a "homecoming" as he moves from the first Salesian mission land to the cradle of the charism and missions of Don Bosco.

Fr Antúnez, now 61 years old, learned about the Salesians at the age of 13 and was struck by their example. He met young theology students full of desire to be with young people and he found exactly the same enthusiasm wtihin himself too, which transformed into his real vocation. His answer and expression took place on January 31, 1983, at the age of 24, in the form of his first vows.

Another 12 years passed before his participation in the Salesian charism materialized into his priestly ordination. He was a happy Salesian who taught school subjects to children along with pastoral service. He was assigned to Puerto Desiado, Province of Santa Cruz, for four years; later, he was sent further south, down to Rio Grande and Ushuaia where, on a mandate from the then Rector Major, Fr Pascual Chávez, he was given the task of relaunching the Salesian presence in that city.

In all, he has spent 18 years in Patagonia, mainly addressing the issue of massive youth migration. He witnessed that migration of youth meant interruption of educative cycle, and a trauma due to broken familial relationships. Later recalled to Buenos Aires, he collaborated with the then ARS Provincial, by becoming his Vicar and then later as the Provincial Economer.

“I have always followed what God asked of me through the Congregation,” he commented today. “Now I am here to bring my experience to the service of 'Don Bosco Missions', of course. But probably also to re-read my own spiritual journey.”

“Patagonia formed my heart,” he continues, “because I lived the charism of the Congregation with great Salesians and in direct contact with young people. Today, I have the opportunity to 'pass by' and to visit Don Bosco every day. When they offered me the new job, I immediately thought: 'Now I'm going to live with him!'"
Animated by this thought, Fr Daniel reasons on his charism: “What must identify us is the theme of paternity: this is Salesianity. It is fulfilled in a permanent readiness to accompany, to be with others, to listen, to be a friend, a companion, a father, and a shepherd.”

With trust and confidence of those who believe in Providence, and with typical Salesian joy, he concludes: “I live this new experience as a gift, and am happy to be a Salesian. I look at my story and I tell myself that it is not possible that it was I who wrote it: God wrote it!”