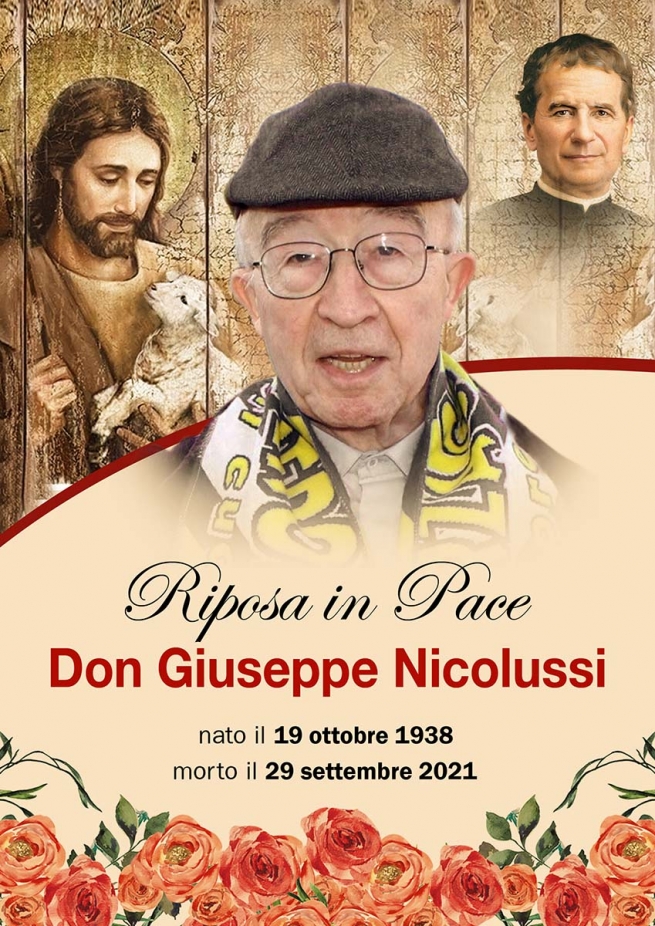 (ANS - Ancona) - Fr Giuseppe Nicolussi passed away yesterday, 29 September, in Ancona (2002-2008). He was the former Provincial of Chile (1978-1984), Superior of the Vice Province "Maria Sede della Sapienza" of the Salesian Pontifical University (UPS) of Rome, as well as General Councilor for Formation for two terms (1990-2002) besides various other responsibilities.

“Fr Nicolussi was a man of great faith and humanity, a Salesian and an exemplary religious, who made a fundamental contribution to the Formation of the Congregation,” said the Rector Major, Fr Ángel Fernández Artime. “His big and generous heart, as a true Son of Don Bosco, guided him throughout his life to give himself to the good of young people, especially those called to serve in the Salesian Society. Animated by missionary zeal, he has always spent himself in humble and discreet service, dedicating himself completely to carry out the mission entrusted to him in every circumstance in any part of the world he was asked to. He nurtured a robust and filial devotion to Mary Help of Christians, and perhaps it is no coincidence that he was called to Heaven not far from the Holy House of Our Lady of Loreto. He was and remains a shining witness of consecrated and Salesian life, who can certainly be a model for those who are taking their first steps in Salesian Formation today.”

Born on 19 October 1938 in Bolzano, Italy, Giuseppe Nicolussi completed his novitiate in Albaré, where he made his first profession on August 16, 1955. While still very young, he was sent as a missionary to Chile and in fact it was there that, after completing his theology studies, he received the priestly ordination on 28 August 1965 by the Salesian Cardinal Raúl Silva Henríquez.

Back in Chile, he joined the teaching and formation team at the Salesian Theologate in Lo Cañas, Santiago, and of the Faculty of Theology of the Pontifical Catholic University. At the provincial level, he was first appointed Vicar, then Provincial, in the years from 1978 to 1984.

Subsequently, he was called to Rome by the then Rector Major Fr Egidio Viganò to work on the drafting of the new Ratio and on the commentary of the new Constitutions. He returned to Chile again as Rector of the Theologate of Lo Cañas in 1988, and remained there until 1990, when the 23rd General Chapter elected him as the General Councilor for Formation, with a re-confirmation at the successive General Chapter as well.

Having finished this mission, in 2002 he was appointed Superior of the Vice Province of UPS, and after six years of service, in 2008 he became Rector of the Salesian Generalate.

From 2015 he worked as a confessor of the community of theology students "Zepherino Namuncurá" at Salesian house Gerini in Rome, where he was greatly appreciated for his paternity, humility, piety and pastoral service.

The current General Councilor for Formation, Fr Ivo Coelho, remembers him thus: “knew him as Rector of the Pisana community - gentle, discreet, and always up to date with what was happening in the Church. He was a great reader and had an enviable ability to synthesise and comunicate. But I knew him best as confessor in the “Gerini” community of the theology students in Rome, and that is the memory that will remain. I was amazed at the way this man, who had been part of the highest levels of government in the Congregation, was able to insert himself without ceremony into the community and gain the confidence of the students. He offered a very precious service of confession and spiritual accompaniment. I have the feeling he also went out of his way to help various students and others with their assignments and theses. I know he certainly helped us with some of the texts we were working on in the Formation Sector. But above all don Giuseppe gave us the wonderful example of a Salesian life lived with simplicity and serenity. We will miss him.”

Finally, the Rector of the “Gerini” community of theology students, Fr Adam Kazimierz Homoncik, also shared some thoughts on Fr. Nicolussi with ANS: “He was a man of discreet and friendly person. Even in his own humble and silent way, he did a beautiful job. He was truly human and full of joy. Every day he would tell us intelligent jokes that made us smile and stimulate our thinking at the same time. He was always up-to-date with matters concerning the Church, the world, the Congregation and with the life of each one of us! He would learn a lot to share with us and summarised everything to involve us. He was always looking for positivity, good news, and hope. He was truly friendly, even when he had to be serious! During the sacrament of confession he made us feel that the Lord was near! He was human in his advice and paternal in his attitude. Fr. Giuseppe was totally a man of God who dedicated himself to the Lord to give himself to others. He was passionate about Don Bosco and in everything he did in his life he showed how much it is worth being a Salesian for young people!”.