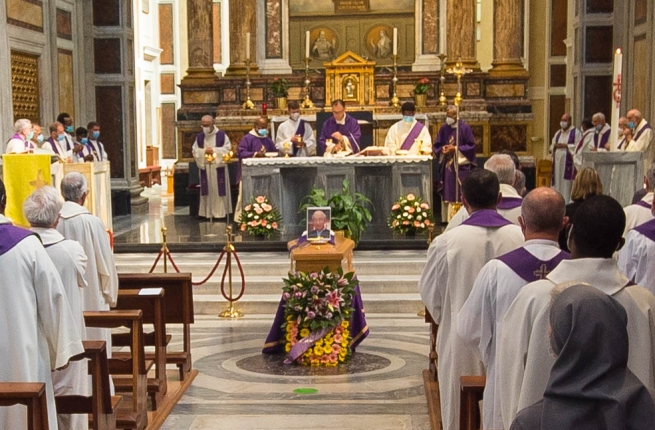 (ANS - Rome) – The funeral mass of  Fr. Giuseppe Nicolussi, SDB (1938-2021), presided by the Rector Major F.r Ángel Fernández Artime, took place yesterday, 1st October, in the Sacred Heart Basilica, Rome. The funeral ceremony was well attended by many Salesians in Rome. The live streaming also made it possible for many people from all over the world, to accompany the last journey and pay fitting homage to a Salesian who was much loved in the Congregation, and beyond.

A summary on the life of Fr. Nicolussi was read out at the beginning of the mass, which gave a glimpse of his Salesian life and his service to the Congregation in various capacities and at different locations. Noteworthy among them are his service: as Provincial of Chile (1978-1984), in drafting the new Ratio, as Superior of the Vice Province "Maria Sede della Sapienza” of the Salesian Pontifical University (UPS) in Rome (2002-2008), as General Councillor for Formation for two terms (1990-2002) and finally as the Rector of the Community at the Salesian Generalate in Rome (2008-2015).

"We want to celebrate in faith the life of our dearest Fr. Giuseppe", said the Rector Major at the opening of the Mass. Recalling some of his traits he further remembered the beauty of his personality, his loving attitude, his depth and his being a humble Son of Don Bosco. The other main concelebrants at the mass were Fr. Pascuál Chávez Villanueva, Rector Major Emeritus, Fr. Ivo Coelho, General Councillor for Formation, and Fr. Maria Arokiam Kanaga, Superior of UPS.

During his homily, the Rector Major recalled the memory of Fr. Nicolussi, affirming that he was "a great believer, a great Salesian priest, an exceptional Son of Don Bosco and a great man of the Congregation". He mentioned how his passion for studies and formation never separated him from the typically Salesian love for the poor. Fr. Angel Fernandez exhorted all present to overcome the aspect of human grief for the loss of the confrere with the light of faith in Jesus Christ who conquered death. He also quoted article 54 of the Salesian Constitutions, which states: "For the Salesian, death is illumined by the hope of entering into the joy of his Lord. And when it happens that a Salesian dies working for souls, the Congregation has won a great reward".

At the end of the celebration, Fr. Chávez Villanueva also offered a touching tribute in remembrance of Fr. Nicolussi, with whom he had worked for many years. He recalled five particular traits that impressed him, namely: humility, always being at the service of the Congregation and his neighbour, dedication to the tasks entrusted to him, his intelligence and friendliness.

Homage was paid to Fr Nicolussi, with many messages that people from all over the world had sent. Guido Callegari, the nephew of Fr. Nicolussi  shared his feelings and sentiments on behalf of the family.  Fr. Ivo Coelho and Fr. Maria Arokiam read out the various condolence messages received, from Mother Yvonne Reungoat, Mother General of the Daughters of Mary Help of Christians, from Cardinals, Archbishops, Salesian bishops and Provincials from all over the world who had expressed their sentiments, paying tribute to the deceased.

On the Facebook page of ANS it is possible to watch the funeral ceremony again and relive the emotional and sincere comments from those who had the good fortune to know this authentic Son of Don Bosco.