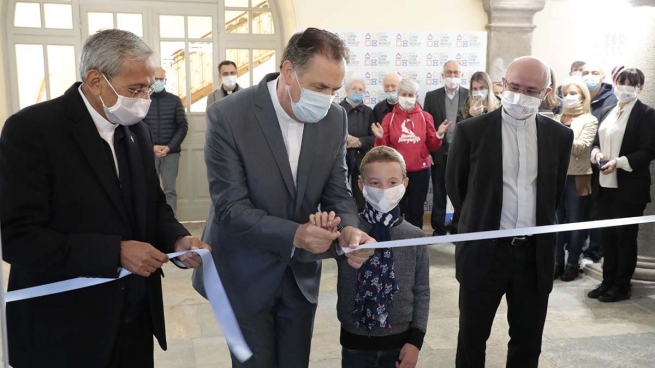 (ANS - Turin) – “Our Congregation of the Salesians of Don Bosco has the joy and responsibility of delivering, for the good of the whole Salesian Family in the world and for the pilgrims and tourists of the City of Turin, this new museum setting, completely renovated, but retaining its originality, to present Don Bosco's educational and spiritual adventure.” These were the words of the Rector Major, Fr Ángel Fernández Artime, at the inauguration of the "Don Bosco House Museum" one year ago, during the Press Conference at the inaugural ceremony before cutting the ribbon and officially opening to the public, on 4 October 2020.

In one year of life, the Don Bosco House Museum, located in the Salesian cradle of Valdocco, has not only presented the life of Don Bosco to the many pilgrims and visitors; but has also hosted temporary exhibitions, carried out recreational and educational activities, participated in projects to communicate through art and its service as a museum, the voices of the women and men who have been protagonists. It has become part of the Piemonte Valley of Aosta Museums Subscription circuit. Even today, many initiatives continue here to represent the current cultural, as Don Bosco did. Through the exhibition which opened last January, to mark the centenary of Fr Paul Albera the 2nd successor of Don Bosco, it has reinforced its Salesian nature. The exhibition is still ongoing.

Inaugurated during the Covid-19 pandemic, the Don Bosco House Museum immediately knew how to adapt to the needs of the time: in fact, when the restrictive measures imposed by the Italian authorities required the closure of the museum to the public, it remained open “online”, offering to the visitors from around the globe a digital presentation of its over 4,000 square meters of exhibition halls across  the three floors.

Just recently, on 8 September, the setting of the Don Bosco House Museum was completed with the opening of the last two rooms dedicated to the Saints, Blessed, Venerable and Servants of God of the Salesian Family. A privileged space was dedicated to Saint Maria Domenica Mazzarello, the co-founder of the Daughters of Mary Help of Christians, with whom Don Bosco understood that he could carry on his great dream for girls. There are also over 30 display cases containing relics and objects, collected with the contribution of the Salesian Family from all over the world, which belonged to the various saintly personalities who interpreted Don Bosco's charism through their lives. They range from the martyrs of the 1900s - like the five young Polish oratorians from Poznan, Poland; or the blessed José Calasanz, Enrico Saíz Aparicio and their 93 companions, who were killed during the Spanish civil war; or Fr Rodolfo Lunkenbein and Simão Bororo, who paid with their lives for their work of evangelization and social promotion among the indigenous people of Brazil - up to the most recent witnesses, whose journey towards the altars has just begun, like the missionary in Latin America Fr Luigi Bolla, or the priest who always reaches out -Fr Silvio Galli.

The Don Bosco House Museum, which can be visited for free, thus wants to continue to be a space for reflection and exhibition, which collects the desires and sensibilities of all those who seek the deepest meaning of existence.