Italy – “The Sweetness of Sanctity”: a show dedicated to Msgr. Giuseppe Cognata, SDB 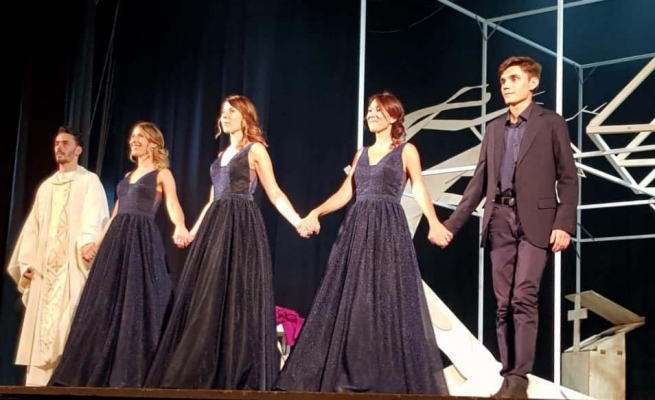 (ANS - Tivoli) - On Saturday 9 October 2021, in Tivoli, the vocal group "Charmonie" presented the world premiere of "La Santità della Dolcezza – the Sweetness of Sanctity", a musical show, written, set to music and performed by Rita Gentili, Sara Narzisi and Silvia Narzisi, with orchestrations by Giovanni Proietti Modi, based on the life of Blessed Rt.Rev. Giuseppe Cognata, Bishop of Bova, Salesian, founder of the Salesian Oblates of the Sacred Heart, whose Cause of Beatification was opened on 10 December 2020, after the consent given by Pope Francis.

A life narrated through music, the real protagonist of the show, with seven songs that highlight the charisma, faith and humble response to trials that marked the difficult experience of Msgr. Cognata, who was slandered, dismissed from the episcopal order and even removed from the very institute he had founded.

Together with music, the theatre actor Alessandro Nistri interpreted - through different feelings, consciences and intensities - the people who accompanied Monsignor Giuseppe Cognata in the pivotal moments of his life.

The set design is the work of art created by the artist Pierluigi Pastori and created by the "LabOratorio Artistico Don Bosco" under his guidance: a "time machine", a perfect frame of many pictures that are composed in a single scenic space.

The set design is the work of art conceived by the artist Pierluigi Pastori and created by the "Don Bosco Artistic Laboratory" he directs. The set represented a "time machine", a perfect framework of many paintings composed into a single scenic space.

Finally, the precious notes of Riccardo Pastori's violin accompanied the singing. A skilful deployment of lighting of scenes also marked the phases, harmonized the monologues and conferred an evocative atmosphere to the "time machine" dominating the scene, in which the Christological symbols of suffering were transformed into the keys that open the doors of Holiness.

Joyous contentment was expressed by Mother Graziella Benghini, Superior General of the Salesian Oblates of the Sacred Heart, for the artistic rendition and for the profound message of hope that it conferred on the audience.