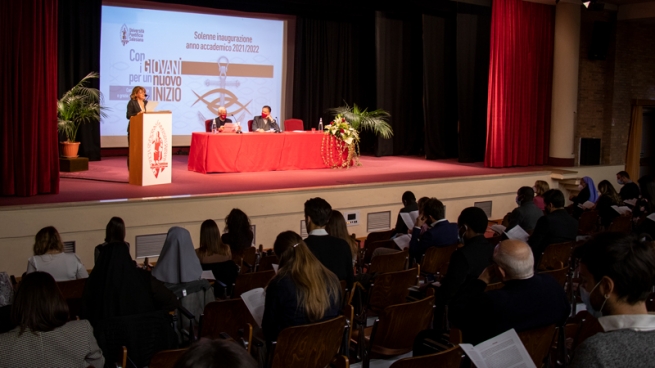 (ANS – Rome) – The inauguration of the Academic Year 2021-2022 of the Salesian Pontifical University (UPS) was held yesterday, 14 October 2021. The Rector Major and Grand Chancellor of the UPS, Fr Ángel Fernández Artime, presided over the Eucharist at the parish church of "Santa Maria della Speranza" adjacent to the university campus. Subsequently, as the Academic part of the event, the new Rector, Fr Andrea Bozzolo, gave the introductory speech, followed by the keynote address of Prof. Susy Zanardo, professor of Moral Philosophy at the European University of Rome, on the guiding theme of the inauguration and the entire new year: "With young people for a new beginning. Change of era and grace of hope".

Fr Á.F. Artime in his homily at mass, began by recalling that “the Holy Spirit be for us believers, today and always, the guide of our lives as believers, guide of the Academic Year for each one of us, the guide and life of our university as an institution".

Then he recalled the mission of the UPS,"to show how the light of faith generates thought and nourishes educational proposals". And, reflecting on the challenges of this time, and the motto chosen, he observed: "only an intense spiritual experience will offer us the indispensable light that which is called for through this year's academic motto: 'a new beginning'".

Finally, before concluding, he recalled that in November we will celebrate the hundredth anniversary of the birth of an illustrious UPS professor, the venerable Don Giuseppe Quadrio, from whose example he called upon the entire academic community "to ask the Lord for the grace of a heart docile to the Holy Spirit".

Once in the Paul VI Hall of the UPS, Fr Bozzolo illustrated in broad terms the salient moments of the life of the institution in the past year, during which, despite the difficulties of the pandemic, the Salesian university has educated and accompanied over 1,700 students, from 97 different countries, over half being lay people, thanks to the work of the 275 Professors.

Then, he outlined the prospects for the new year: "More than offering concrete operational lines, which will have to mature through common dialogue, I think it is the Rector's task to outline the cultural and spiritual formative horizon, within which multiple activities can take place". And after citing the guiding motto for the year 2021-2022, he stressed the need not so much to offer new services or new initiatives, but to proceed with an authentic renewal of community dynamics and the capacity to witness. He concluded by reiterating that we must "face the challenges we face before our University and for our times" in teaching Christian hope.

For her part, Prof. Zanardo, after having illustrated with a wealth of examples and quotes said: " in this historical moment, in the complexity and dissonance of experience, the question of meaning and the meaning of everything remains inescapable." She underlined the role of the university in accompanying young people in their search for answers and encouraged the latter by reminding them: "Be fabrics of dreams, but your freedom needs bonds and roots".

In conclusion, Fr Á.F. Artime pronounced the ritual words with which he opened the new academic year.

Videos to review the Eucharistic celebration and the Academic part are available on the UPS YouTube channel.