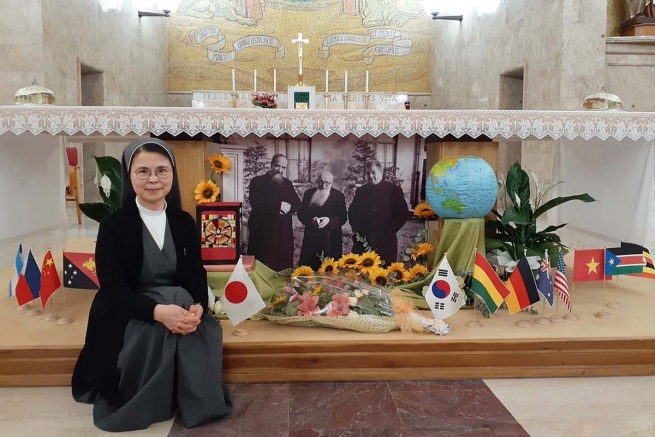 (ANS – Ariccia) – Caritas Sisters of Jesus (CSJ, or “Suore della Carita di Gesù”, in Italian language) have elected during their 18th General Chapter on October 14th (Ariccia, next to Rome, Italy) their new Superior General, Sr. Emiliana Park. She succeed the former Superior Sr Teresia Furuki (2015-2021) as the leader of the more than 900 sisters strong religious congregation, born in 1937 in Miyazaki, Japan.

“Humanly, although I’m afraid, I believe that the Lord will lead me because I have surrendered everything to the Lord and obeyed. At the 18th General Chapter, we are making a resolution that ‘we must live our founding charism creatively while looking at the signs of the times’. I’m asking the Spirit of the Risen Lord to renew us. And I would like, together with all fellow sisters and in solidarity with the Salesian Family, to step on the 6-year journey of Caritas Congregation.”

The 45 delegates of the General Chapter gathered in Ariccia, represent their fellow sisters living and witnessing the Love of God to the poor people in 16 countries in all 5 continents, with a recent strong drive for the African missions (Uganda, South Sudan). In 1986 the Congregation was officially accepted as the 16th member of the Salesian Family of Don Bosco.

The theme of the General Chapter is “Renewed by the Spirit of the Risen Lord: For our common home, where we all live together” and the GC18 will conclude on 21 October with the closing Mass celebrated by the Rector Major in the Basilica of Mary Help of Christians in Valdocco, Turin.