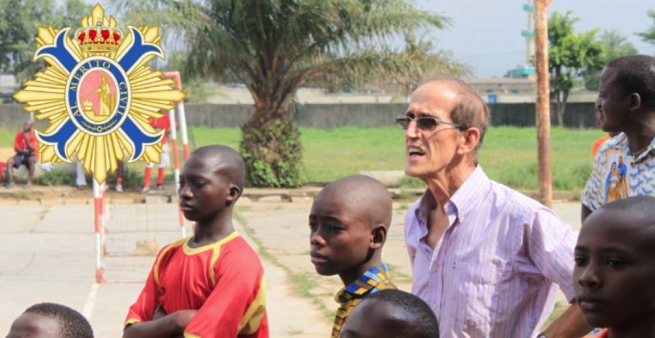 (ANS - Madrid) - The Spanish Salesian missionary Fr Antonio César Fernández, assassinated in Burkina Faso in 2019, was posthumously awarded the Grand Cross of the Order of Civil Merit, on the proposal of the Ministry for Foreign Affairs, the European Union and Cooperation. The Official State Gazette published Royal Decree 893/2021 on 11 October with which it granted this prestigious recognition to the Salesian missionary.

Fr Antonio César Fernández was killed on February 15, 2019, during a jihadist attack on the southern border of Burkina Faso. The attackers stopped the vehicle in which the Spanish missionary and two other Togolese Salesians were traveling on their way back from the Provincial Chapter of the French speaking Salesian Province of West Africa (AFO), which had been held in Lomé (Togo). After examining the vehicle, Fr Fernández was taken to a nearby forest, where he was later shot and killed.

Born in Pozoblanco, in the Province of Córdoba, on 7 July 1946, and a Salesian since 1963, Fr Antonio César Fernández had served as a missionary in various African countries since 1982, the year in which he started the Salesian presence in Togo, his first assignment. In the following years he worked as Novice Master (1988-1998) and served, among many functions, as Delegate for the AFO at the 25th General Chapter of the Salesians in 2002. His last assignment was to serve the Salesian presence in Burkina Faso. He was killed at 72 years of age, after 55 years of Salesian life and 46 of priestly life.

After his assassination, various tributes were paid to him, both where he had worked as a missionary and in his country of origin. His much-attended funeral was held in Pozoblanco, where he was buried. Since May of this year, his hometown also has a street named after him.

The Order of Civil Merit, established by King Alfonso XIII in 1926, currently depends on the Spanish Ministry for Foreign Affairs, the European Union and Cooperation. The award is awarded to reward “the civic virtues of public officials in the service of the State, as well as the extraordinary services by Spanish and foreign citizens for the good of the Nation.”  It consists of seven degrees, which are, from highest to lowest: Collar, Grand Cross, Commander by Number, Commander, Officer's Cross, Knight's Cross, Silver Cross. In the case of the Grand Cross, the person awarded this title is given the title of Excellence or Most Excellent Sir or Madam.

The Salesians of Spain have expressed deep gratitude for the posthumous conferral of the Grand Cross of the Order of Civil Merit to the Spanish Salesian missionary Antonio César Fernández, because in this way, his dedicated life is presented as an example for all of society.