I feel at home 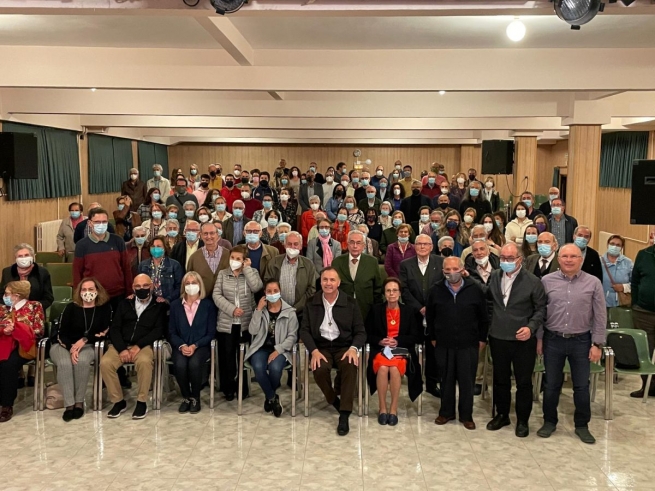 (ANS - León) On Friday 15 October, the Rector Major of the Salesian Congregation began a three-day visit to what was once his home province. Ángel Fernández Artime, the 10th successor of Don Bosco, had a meeting with the Salesian Family of León and with the Salesians of the Santiago el Mayor health house. On Saturday 16 and Sunday 17, in Valladolid, he will take part in the celebrations marking 50 years of Salesian presence in the city.

In the hall of the Don Bosco Centre in León, more than a hundred people were waiting for him in the afternoon, including Salesians, Salesian Sisters, Salesian Cooperators, Members of Damas Salesianas, Past Pupils and educators from the different areas of the Salesian presence in León. As soon as he began his greeting to those present, the Rector Major commented that he felt "at home" and moved to see the different groups of the Salesian Family and "so many familiar faces, with whom I have shared so much".

He began by speaking about the reality of the Salesian Family in the world as "a very rich reality", which has been able to respond to the needs of those most in need during the pandemic. Fernández Artime pointed out the wide network of collaboration and communication that was activated during the pandemic, and which allowed aid to be channelled (more than 12 million euros) to hospitals, canteens, and aid the neediest families in 73 countries. He valued the sensitivity towards those most in need and the creativity in providing responses. He said, “We have to offer, whatever may be the situation, the best that we have as a charism.” He continued specifying, “As men and women believers, the family spirit that we have as our identity card, and the spirit of joy and hope that we are to carry are the best that we can offer.”

Responding to questions from the audience, the Rector Major underlined the importance of continuing to accompany young people in discovering their vocation and explained that he feels it is "a great blessing" that each year the Congregation has about 450 novices. Addressing educators, he pointed out the importance of being aware of the "topicality of the Salesian charism", and insisted on "the affective and effective presence among young people", being among them, as one of the fundamental, inalienable elements of Salesian pedagogy.

He also referred to the moment the Church is living with the celebration of the synod on synodality. He explained that, as Salesian Family, we must participate through the initiatives of each diocese, but also grow, as Congregation and Family, in the dimension of synodality, "getting to know each other more, dialoguing more among us, listening to each other more".

"Thank you for your dedicated life".

After the meeting with the Salesian Family, the Rector Major went to the Santiago el Mayor community to share prayer and dinner with the elderly and sick brothers and sisters of the nursing home.

Visibly moved, the 10th successor of Don Bosco addressed these Salesians and wondered if "a whole life of dedication will have been worthwhile", to which he replied that "today the Congregation is what it is thanks to you". For this reason, he asked these sick confreres that "the pastoral work you can do now is your prayer, which has an exceptional value". "First you lived the pastoral care from your dedication - he told them - and now you live the pastoral care from the Gethsemane of sickness, weakness and suffering".

The first day of the Rector Major's visit to León concluded with a family dinner attended, in addition to the Salesians from the city's communities, the Salesian Sisters from the nearby María Auxiliadora school were present too.