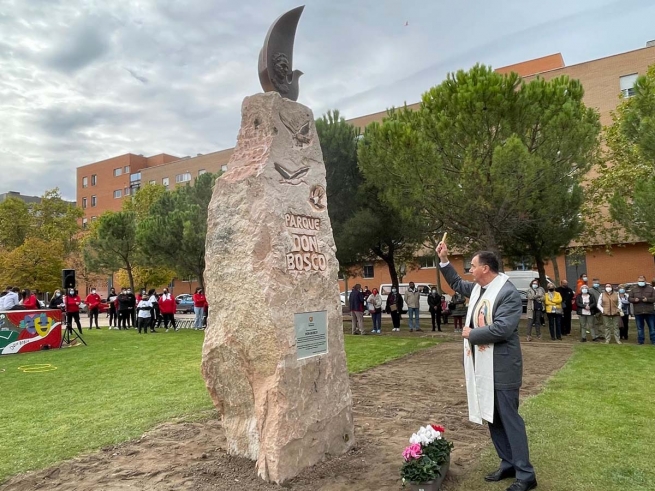 (ANS - Valladolid) - The celebration of 50 years of Salesian presence in Valladolid, in particular in the districts of Pajarillos and Las Flores, was the main reason for the visit of the Rector Major, Fr Ángel Fernández Artime, to the city of León. On Saturday 16 October, as part of the anniversary celebrations, the "Don Bosco Park", located next to the Salesian presence, was inaugurated in Valladolid and a commemorative monument was also blessed.

About 200 people gathered in the park: children and young people, educators, members of the Salesian Family and many others who, in the course of these 50 years, had woven into the history of this presence, together with the representatives of the Municipal Council of Valladolid, the deputy mayor and 5 councilors, and the Rectors of the Salesian houses of the “Spain-St James the Greater” Province (SSM) were also present.

The ceremony began with a brief review of the history of these 50 years. Subsequently, Carlos López, the sculptor of the monument, explained the meaning of the monolith, with the name of Don Bosco engraved on it, and the bronze dove with the relief of the face of the Turin’s saint above it. "Don Bosco's face is engraved on the dove, is a reflection of Salesian pedagogy, because the Salesians were the protagonists of education in this neighborhood, leaving in the place the seal of the founder," he explained.

Manuel Saravia, deputy mayor, thanked the Salesians for their presence in the city, underlining that the title of the park to Don Bosco, and the adjacent "Salesian Steet", were extremely meaningful for the activities carried out by the Salesians in education, social promotion, and youth care. Before blessing the monument, the Rector Major thanked the families, the neighborhood, and the Municipality for their presence and their support for Salesian initiatives. In this sense, he expressed the commitment of the Salesians to “continue to be in the places where people were.” “We loved Valladolid very much and felt much loved, which is why we will always be by your side to continue dream our together for the future,” he said.

Fr Rogelio Arenal, Rector of the house, closed the event thanking everyone for their presence and generosity, and the Municipality of Valladolid for their support.

Another significant moment of the day was the meeting convened by the Provincial, Fr Fernando García, and by his Council, with all the Rectors of the SSM houses - the first meeting of this type to be held in person since the beginning of the pandemic.

The Rector Major, speaking to the Rectors, stressed that “the Congregation is experiencing a very beautiful moment, with serenity, looking ahead” and with “profound communion”. Therefore, he insisted on three challenges on which to continue working: the option for the poorest young people; deepening the charismatic identity in the Salesians. in the laity and in the houses, and finally to commit to the formation of the Salesians and of the laity who share the charism and mission.

Again, Fr Á.F. Artime underlined the role of the Rector as “guarantor of the charismatic identity of every Salesian house” and stressed the need to live “the Salesian sacrament of presence” among young people, in an “affective and effective” way, as “the commitment we make with them, to be among them, is always valid.”

In the afternoon, the Rector Major met Most Rev. Ricardo Blázquez, the cardinal archbishop of Valladolid, and then completed the day with a moment of prayer and dialogue with the entire Salesian Family of the city.

On this occasion, he insisted on the importance of the mission shared with the laity. To the members of the Association of Mary Help of Christians (ADMA) he urged them to “be what you must be”, offering, with respect, a proposal in the freedom that comes from the Gospel. To the Salesian Cooperators he highlighted the task of “witnessing to a true Christian life”. And, faced with the challenges of the present moment, he encouraged, as the Pope invites, to be the leaven, to build bridges, and to be a Church with open doors.