RMG – Network of VTCs in America: Provincial Delegates of the Continent meet 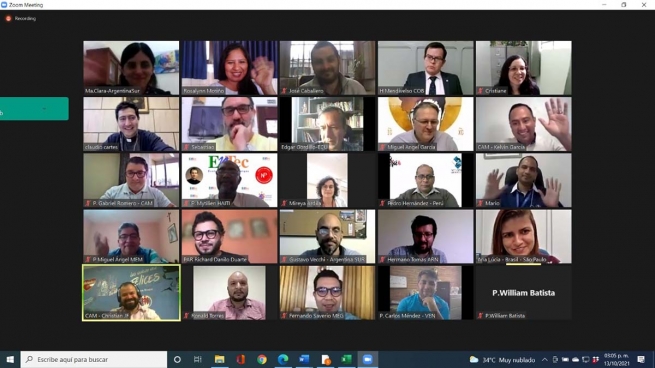 (ANS - Rome) – On Wednesday 13 October, the department of Youth Ministry held an online meeting of the “Network of Vocational Training Centres (VTC) in America. It was attended by 15 delegates of the Provinces of the American continent, Fr Miguel Angel García Morcuende, the General Councilor for Youth Ministry, and a management group composed of 8 people. The meeting was conducted as part of the project to strengthen the skillsets and was led by Fr Claudio Cartes, the Youth Pastoral delegate of America.

During the meeting, Fr ​​García Morcuende urged the participants to "network with like-minded forces as a tool for improvement", which will generate institutional changes in increasingly complex activities, and to advance as a network in the areas of training and upskilling, of providing support and as part of institutional development, institutional relations and visibility.

The idea of ​​such a network began to be formulated in 2018, but its practical coordination began to mature more intensely from 2020. The meeting held last week was a significant milestone, as it brought together for the first time the representatives of various Provinces specifically appointed for this purpose and favored knowledge and interaction between the participants.

This network, which was consolidated in various stages and with the accompaniment of the Congregation’s Youth Ministry Sector. The primary motive of this move was to provide a space for discussion at the continental level, capable of fostering dialogue and reflections on the strengths and common difficulties of the Salesian VTCs. In this way, it will be able to meet the real needs of the young people of the American continent in terms of training, professional or vocational qualification. This would enable them to search for decent work, which promotes them as positive agents of change in society and in the Church. At the same time, the network also seeks to optimize processes, share good practices and promote training requirements, through coordination of institutional processes. In turn this would provide a greater visibility in the continent's VTC environment.

The meeting, organised by the Salesian VTC Network Management Team, presented the steps taken to date and the different significant stages that are upcoming. Next stages in promoting the VTCs are: reinforcing the identity, reasons and challenges; the impact and benefits of networking for the VTCs in the continent; and the organisational proposal currently under consideration for the network.

Afterwards, the provincial contact persons for the VTCs shared their expectations and suggestions, with a view to generate synergy inspired by the charism and following the example of networking based on other similar experiences of networking in the Salesian mission, such as the Salesian School in America (ESA) and the Salesian Network of Works and Social Services for Young People at Risk (RASS).

At the end of the meeting, it was agreed to share the provisional schedule for 2022, which would be proposed by the management team to be taken into consideration in planning the works of each Province on the continent.