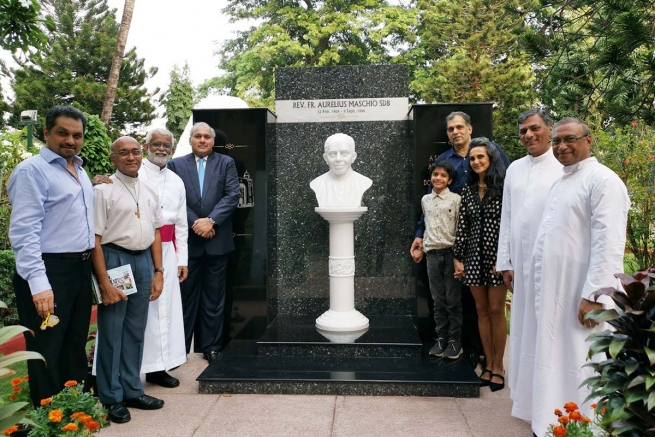 (ANS – Mumbai) – A bust representing the patriarch of the Salesians of the Province of Mumbai, Father Aurelius Maschio, was unveiled by Bishop Most Rev. Barthol Barretto in the presence of the Provincial Fr Savio Silveira, Rector of the Shrine of Don Bosco’s Madonna Fr Edwin D’Souza, well-wishers and Chapter of the Provincial Chapter [PC 22].

The unveiling of the bust memorial in the garden of the Shrine Grotto, honours the memory of Father Maschio on his 25th Death Anniversary. Furthermore, the permanent-exhibit museum showcasing the memorabilia of Father Maschio in the Shrine office building, is a testimony to his pioneering works and the rapport with benefactors and well-wishers. Some of the various articles on exhibition are: Father Maschio’s typewriter on which he spent many laborious hours, corresponding with numerous people; his mass-kit [chalices, ciboriums, etc]; his liturgical vestments; his personal effects; well-preserved sermon-notes; certificates/citations of appreciation; and many awards.

The ceremony was coordinated by the Rector of the Shrine Fr D’Souza, who also oversaw the entire process of bringing to fruition this memorial project to Father Maschio on his 25th death anniversary. PDDM nun Sister Vimala undertook the fabrication of the bust, while William Fernandes, a long-time associate and art designer conceptualised and designed the layout-interior of the permanent-exhibit museum.

The occasion of the 1st session of the PC22 was chosen so that the Salesians of Mumbai could thank God for this magnanimous and towering pioneering architect of various works and settings across Maharashtra, Gujarat, and Madhya Pradesh.

Fr D’Souza shared the message sent by Fr Maschio’s earliest and one of the first benefactors from Italy, Giovanni Bernasconi who reminisced and traced back his family’s long association with Fr Maschio.

Fr Silveira recalled the encounter, listening and discernment of Fr Maschio, a process that Pope Francis invites all in the lead up to the assembly of the world Synod of Bishops in 2023. He noted, “God-willing, perhaps this is the unfolding of God’s plan to initiate the process of raising Fr Maschio to the honours of the altar, as expressed by many.”

Bishop Barretto pointed out the maxim of Fr Maschio was to “give, give and give, which he lived all through his life, reaching to the most marginalised poor in the city of Mumbai.” Mark Fernandes spoke on behalf of the Fernandes Family – who manage Sylvester and Co., the Custom House Agents licensed by the Customs Department, and the Ministry of Finance of the Government of India – the foremost benefactors of Father Maschio for over 7 decades. He said, “it is thanks to Fr Maschio that we have been blessed with many graces by God, and it is our hope that Fr Maschio still looks upon us with compassion.”

The short ceremony ended with a token of gratitude to the collaborators and artists who laboured to set up the bust and permanent-exhibit museum within 60 days.