Mexico – “Leadership in the Association of Salesian Cooperators” Regional Meeting 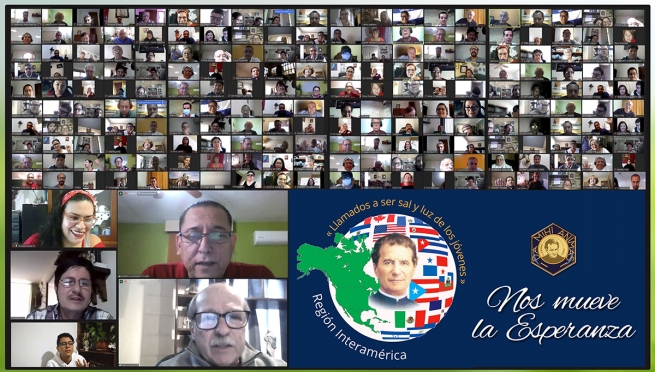 (ANS – Guadalajara) – The Salesian Cooperators of the Inter-America region held their second virtual training meeting on Sunday, October 17, which revolved around the theme “Leadership in the Association of Salesian Cooperators”. Three hundred cooperators participated, coming from the thirteen countries that make up the region and from other countries as well.

Alfredo Algandar, the Provincial Coordinator for Mexico North, welcomed all the participants. The world councilor of the Interamerica Region Francisco Burciaga also addressed the attendees with a few words.

Fr Alejandro Zepeda, SDB, illustrated the guiding theme and encouraged participants to assume leadership with the characteristics that Don Bosco offers, expressed in the Statute of the Project of Apostolic Life, so as not to get lost in things that do not go with the Salesian charism:

- experiencing authentic compassion to allow ourselves to be moved by the Holy Spirit who keeps us in constant motion.

- upholding fidelity to the promise made by the fervent desire to serve God and His children most in need.

The motto of the meeting was "Called to be salt and light for the young." The objective was to provide the participants with a formative, fraternal, and community experience that would help raise awareness of the need for formal leaders who promote the internal and external of the Association in the mission to which one has been called: to be the first to put oneself at the service of the Gospel.

The Cooperators of Northern Mexico presented a video of their province, highlighting the testimony of Salesian Cooperators, from the youngest to the oldest in their province, who shared their vocational experience and encouraged those present to live their mutual vocation faithfully.

The Salesian Cooperators of the North Mexico province were the protagonists of the event and the team of communicators of the region were coordinated by Martín Calderón, the regional head of formation. This is the second of seven meetings that the region will have monthly until July 2022.

This meeting was held in Spanish, with simultaneous translations in English and French, languages ​​of the Inter-America Region.

You can see the transmission through Facebook live on SC Interamerica.