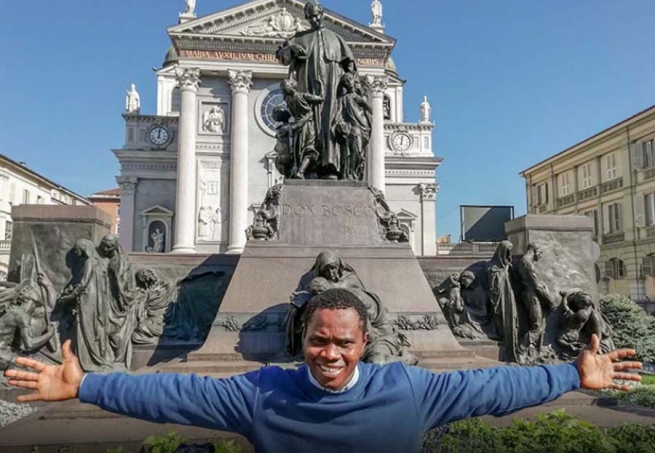 (ANS - Turin) - Chennor Amadu Bah had never boarded a plane, nor even had had a ride in an elevator or on escalators. He could never have imagined that meeting Don Bosco in the "Pademba" prison in Freetown would change his life so much that he went from being "the king of fights" to the best defender of minors in prison and in the streets. Before returning home to Sierra Leone - on his presentation tour of the "Inocencia entre rejas" (Innocence behind bars) campaign of the Salesian Mission Office "Misiones Salesianas", accompanied by the documentary "Libertad" of which he is one of the protagonists - he flew nine times, visited four countries and traveled thousands of kilometers: all -not only to tell of his testimony of forgiveness and redemption, but also of Salesian works. And since he feels like a "son of Don Bosco" he visited Valdocco and Colle Don Bosco and exclaimed: "I am having one of the best days of my life".

In a month he never put away his cell phone, given to him by a benefactor: it was used to record everything “to show it to the children of the street and tell everything when he returned,” says Chennor. In the evening, moreover, his family calls and also the young people who, like him, work at the “Don Bosco Fambul” center in the capital of Sierra Leone. He was just pure generosity and kindness, always thanking everyone even for little favours.

The Salesian missionary Fr Jorge Crisafulli, years ago, was so moved by his story and by the transformation that took place, thanks to Don Bosco that he offered him a job with the Salesians. Chennor accepted the job and continued to surprise everyone: he gave away his first salary to save a minor he met in prison who had a hernia operation.

During the presentations of the “Inocencia entre rejas” campaign and the documentary “Libertad”, Chennor answered all the questions, however difficult and hard they were, in an an easy and natural tone. His testimony generated standing ovations on several occasions. Chennor spent 17 years of his life on the streets and eight years in the prisons of Sierra Leone. In one of them, also as a minor, he was repeatedly sexually abused, and in some cases even consensually, in order to have food to eat.

“I thought I would die in prison, because I saw the minors around me die ... but Don Bosco saved my life and changed me forever. I owe everything to Don Bosco, and I will always be by his side, working so that no street children end up like me and will continue saving those who are in prison,” he says with a smile on his face.

The first day he entered the prison as Don Bosco's worker, he visited his abuser and brought him food, water and soap. He forced him to look him in the face and told him that he forgave him, but that he should never do anything like that again. “Talking about my situation, accepting it as part of my life, forgiving my abuser and telling him that, has helped me to be as I am now,” he explains simply.

At the invitation of "Missioni Don Bosco", the Salesian Mission Office of Turin, Chennor visited Valdocco, the Basilica of Mary Help of Christians, Colle Don Bosco ... "I prayed in front of Don Bosco and Domenico Savio for all the children who 'Don Bosco Fambul' follows in Sierra Leone. I am very grateful for this trip and because God and Don Bosco have allowed me to change my life. Now my dream is to return to my family and always work for street children and for those in prison.”

Chennor, the best Salesian bodyguard in Freetown when they go out at night to save street children and girls in prostitution, will continue to inspire hundreds of children with his work. “When Augusta (one of the protagonists of the documentary “Love” by “Misiones Salesianas”, Ed.) returned from her trip from Turin, everything she told about Don Bosco helped many girls to realize their dream. Unfortunately, she is now dead, but she is still doing a lot of good from Heaven and I want to be like her and help the children of Don Bosco Fambul,” concludes Chennor.