Poland – First meeting of the School for Salesian Animators 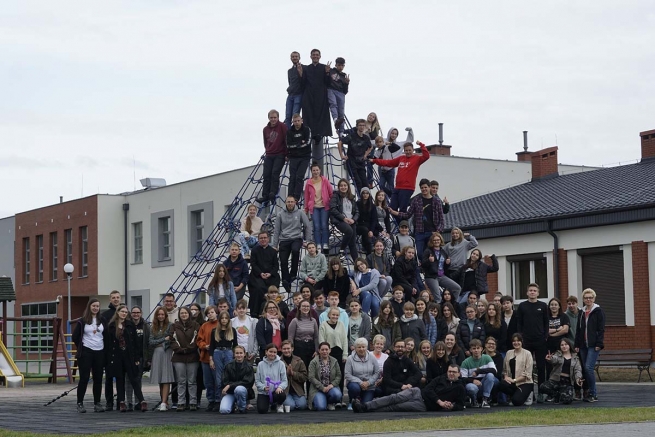 (ANS - Toruń) - The School for Salesian Animators (SAS), was held from 15 to 17 October 2021, at the Salesian Schools in Toruń."Thanks to the great variety of workshops, we had the opportunity to exchange experiences and acquire useful knowledge to do a better job with young people", said a participant.

After a discernment, carried out in June, on the idea of the ​​SAS young people of the Poland-Piła Province (PLN), the organizers decided to articulate the program in a series of three formation meetings to be conducted during the school year, each with a different theme. Almost 90 young animators and educators from various groups and communities of Aleksandrów Kujawski, Bydgoszcz, Czaplinek, Debrzno, Dębno, Gryfino, Kobylnica, Konin, Ląd, Leszno, Lubrza, Piła and Szczecin took part in the autumn meeting dedicated to workshops on play and recreational activities.

The meeting served above all to integrate young people with their peers from other Salesian houses, as well as to acquire new skills in the animation of free time. The organization of activities, led by specialists from the "Fantazja" Animation Center in Człuchów and by the Salesians from Bydgoszcz, Dębno, Krakow and Ląd, encouraged young people to work creatively and to cooperate in groups.

During the workshops, the participants learned not only about games and recreational activities, but they also invented new forms of recreation themselves. They then had the opportunity to test themselves in preparing proposals for a cheerful evening and in conducting games. "We really liked the short theatrical performances, which we can use for evangelization or during Salesian 'good nights'," wrote the participants of one of the groups in their summary of the conference.

In the homily of the Eucharist that concluded the meeting, Fr ​​Damian Okroj SDB, the main organizer of the SAS, referred to the figure of Christ the servant: "In our work, in our service as animators, we must become like Him," he affirmed. Then he recalled the figure of Don Bosco, who at a certain point in his life, being robbed by the boys who came to the oratory, wanted to abandon the path he had chosen. But his mother Margaret showed him the cross: “Then John Bosco understood that to serve others is to suffer, to lose. Service to others, 'service for ...', must be based on altruism, generosity, an open heart, the willingness to lose even something. We do not serve ourselves so much as Christ to reach the reward of eternal life,” continued Fr Okroj.

“The time spent here has been very useful for us and we will certainly use many of the games we learned in the future,” said one of the young participants. While one of the Salesians present shared: “Surprise, amazement, emotion? I'm not sure how to describe what I felt when I saw a group of animators who, late in the evening, on their own initiative, gathered in the school chapel for the night prayer ... "

A video summary of the meeting is available. The next SAS appointment is scheduled in Piła for February 2022.