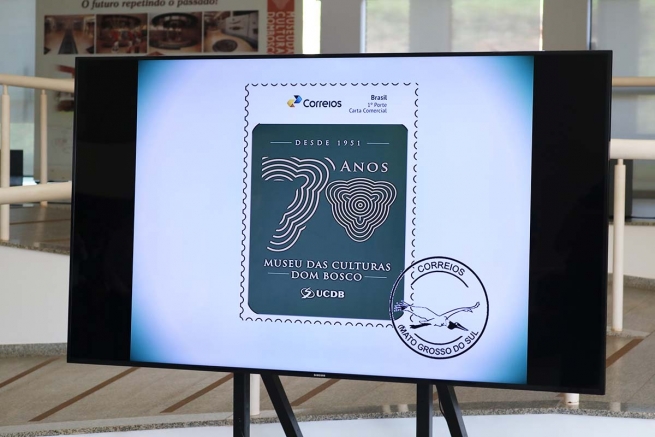 (ANS - Campo Grande) - The "Museu das Culturas Dom Bosco", officially inaugurated on October 27, 1951 (previously called "Museo Dom Bosco"), commemorated its 70th anniversary of existence, with an issue of a special commemorative stamp developed in collaboration with the National Post Office. The ceremony was held on 27 October in the presence of the Vice Province of the Province of Brazil-Campo Grande (BCG), Fr Elias Roberto, the Rector of the "Universidade Católica Dom Bosco" (UCDB), Fr Giuseppe Marinoni, and the interim state superintendent of the Post Office in southern Mato Grosso, Flávio Luiz Dias Leal, as well as various UCDB deans, guests and various authorities. The event took place at the Museum, located in the Indigenous Nations Park, in Campo Grande.

Fr Gildasio Mendes, General Councilor for Social Communication of the Salesian Congregation, also sent a message, in which he wrote: “The Don Bosco Museum of Cultures represents the commitment of the Salesians, through history, to promote, catalog, and make the cultural wealth of indigenous peoples available to the whole of society in a scientific and professional way. The BCG Province, the UCDB, the missionaries and the laity have worked together to offer to all generations, during these 70 years, artistic beauty, cultural heritage, religious expression, and the rights of indigenous peoples. Furthermore, the Museum represents the local cultural expression of peoples and their fraternal universality, Fratelli Tutti, with its variety and richness of works of art, the exhibition of the diversity of the faunal and mineral world of many areas, in a special way of Pantanal, Amazonia, and many other geographical areas of the world.”

“A Salesian Museum,” continues the message, “is a human environment, an ecosystem of values, a habitat for the wealth of people and nature. In this sense, we have the responsibility to continue with the whole of society, families, educators and authorities, to enhance, treat and disseminate the material and immaterial wealth present in this museum. For this reason, the museum is a voice of human fraternity and solidarity between peoples.”

For his part, the BCG Vice Provincial, speaking on behalf of the Provincial, Fr Ricardo Carlos, underlined the historical value of the anniversary and the importance of the commemorative stamp.

While the Rector of the UCDB added: “There are museums for things. This Museum is for mankind.” Then he paid homage to those who worked to gather up the rich collection at the Museum, citing Fr Cesare Albisetti, the native Bororo Tiago Marques, Fr Angelo Venturelli (‘the one who managed to transform Fr Albisetti's manuscripts into what is today the Bororo Encyclopedia’), Fr Gonçalo Uchôa, Fr Felice Zavattaro (‘the great Museum’s great conceiver’) and Fr João Falco, who imprinted its fundamental features on the museum.

Produced in collaboration with the Post Office to celebrate the museum's seven decades of history, the stamp will also be sold in postal agencies. “It is a tribute to an institution of great importance, which is part of the history of Campo Grande. After all, several generations have grown up with the museum as a reference,” said Dr. Dias Leal. “It is known by the whole population as the 'Indigenous Museum'. And its importance has gone beyond the limits of the State, given give the fact that the Museum is a national and international reference… and manages to combine tradition with balanced modernization, and continues to innovate every day.”

Among the other initiatives carried out for the 70th anniversary of the “Don Bosco Museum of Cultures”, there is a traveling exhibition installed at the “Pátio Central Shopping” shopping mall in Campo Grande, launched at the end of September; and soon the dissemination of photos of visitors to the museum in the city center will also begin.

With its rich collection of finds from ethnology and natural sciences, entomology (insects), malacology (shells) and zoology (fish, amphibians, reptiles, birds, mammals), as well as fossils and minerals, the "Don Bosco Museum of Cultures" in recent years has attracted over 500,000 visitors - including St. John Paul II, who visited it in 1991, on the occasion of the museum's 40th anniversary.