Palestine - Simon Srugi at the University of Bethlehem 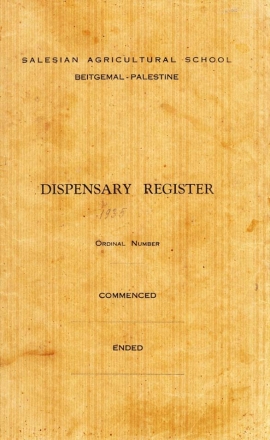 (ANS - Bethlehem) - For decades the Salesian brother Sim'ān (Simon) Srugi was in charge of the medical-nursing clinic attached to the Salesian house in Betgamāl. From 1930 to 1942 he accurately recorded names of patients, types of diseases, treatment administered and their villages of origin. Eight registers of his work have been preserved, the last of which is now exhibited at the "Don Bosco House Museum" in Turin-Valdocco, in the section dedicated to the figures of holiness of the Salesian Family. They document the health service that was provided every day to dozens of sick people (40-45 on average, for a total of over 30,000), originating from more than 70 villages, some even 60 km away from the Salesian Center.

For some time, these registers and the accompanying notebooks (handbooks, notebooks, prescriptions ...) have attracted the attention of researchers. On November 4th, the University of Bethlehem launched a project of an interdisciplinary study of this unexplored archival heritage, from a sociological, medical-nursing, cultural point of view. Among the participants, some descendants of those patients, some are now inhabitants of the refugee camps in the Bethlehem area, among whom the memory of Sim'ān Srugi, "the holy doctor of Betgamāl", is still very much alive.

The academic and religious authorities who attended the presentation encouraged the initiative, the results of which will make that historical period of Palestine at the time of the British Mandate better known. This would highlight the important role that the Salesian community of Betgamāl played in that region’s poor affected by endemic malaria. Srugi, in fact, did not act alone: he was assisted by Sister Tersilla Ferrero FMA, a graduate nurse from the Italian hospital in Damascus, and by Dikran Ciakmakgiàn, a Salesian Cooperator.

The Dean of the Department of Humanities, a Muslim, observed on the occasion: "We are all religious, because we believe in God, we pray...; but true religion is demonstrated with facts. Mu‘allem Srugi is a model!"